The Bhoys dropped more points in the Premiership on Sunday when they were held to a 1-1 draw by Dundee United at home.

Celtic were already missing eight players and had no experienced attacking options to come off the bench.

They face Bayer Leverkusen in the Europa League on Thursday, and though Scales - who made his debut last week in the Premier Sports Cup quarter-final win over Raith Rovers - should at least feature on the bench, Postecoglou stressed the former Shamrock Rovers and UCD defender will need space to find his feet.

"It was good for Liam to make his debut against Raith," Postecoglou said.

"He has come from a different league and has had to get adjusted to training but we were looking for an opportunity to give him some game time.

"When you make your debut you are going to be a little bit nervous so it was great for him to come on against Raith and take his first steps.

"Although he is a bit older in terms of years he is still very inexperienced at this level so we will give him time and develop him properly.

"We sign players because we see something in them but the next step is for them to grab their opportunity." 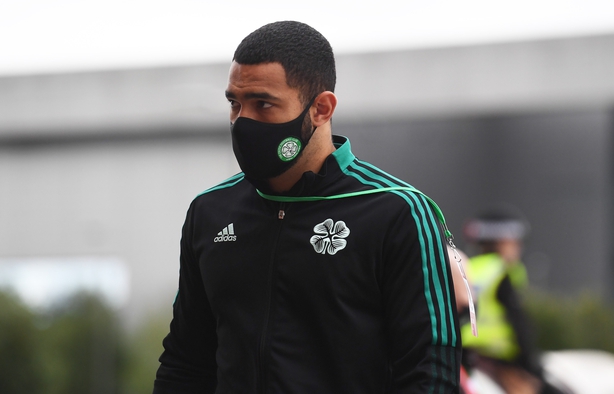 Meanwhile Giorgos Giakoumakis (above) could be set for his debut this week after a scan allayed fears over his calf problem.

The Greek striker was denied an introduction off the bench against Raith last week after suffering an injury while warming up.

But the former VVV-Venlo striker, who was the top scorer in the Eredivisie last season, is set to give Postecoglou some much-needed reinforcements up front.

"We've just got to get through to the next international break," Postecoglou said.

"By then Giorgos should be available and Kyogo [Furuhashi] isn't too far away and so is Cal [Callum McGregor].

"James Forrest and Mikey Johnston will come back to help us - we're hoping post international break.

"The scan [on Giakoumakis] came back actually more positive than we thought so we're hoping he'll get back into training this week, which is good news because he's missed a fair bit.

"It wasn't just the injury which we thought might be significant. We thought he might have to go back into rehab.

"But the fact the scan has come back pretty good means he can get back out training again."

Although Celtic's clash with Bayer Leverkusen will come too soon for the striker, Postecoglou is hopeful he could feature at Aberdeen on Sunday.

"He only really missed two days of training and had a session [on Sunday]," Postecoglou added. "Hopefully he'll be back training with the group early in the week."