Peamount United extended their advantage at the top of the Women's National League after a 3-0 win away at Bohemians.

The victory means the Dubliners go four points clear of Wexford Youths and Shelbourne with five rounds of games to go in the battle for the title.

Stephanie Roche gave Peamount the lead against Bohs at Oscar Traynor Centre on the stroke of half-time with the 55-time Republic of Ireland cap heading in from a corner.

Goals from Tiegan Ruddy and Karen Duggan within five minutes of each other just after the hour mark added two more for the league leaders as they coasted to a 3-0 win.

Wexford Youths moved above Shelbourne into second place on goal difference after a 7-1 win at home to Athlone Town with Teegan Lynch, Ellen Molloy and Kira Bates-Crosbie scoring a brace each. 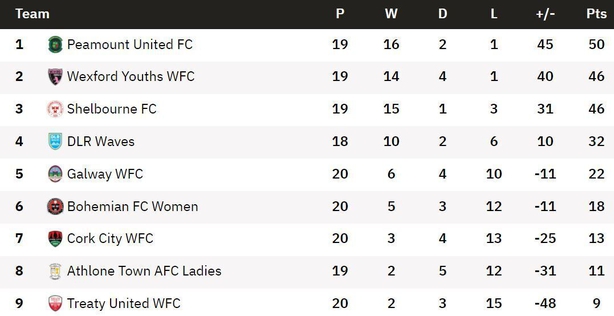 Aoife Haran had given the visitors a sixth minute lead but Lynch levelled for Wexford eight minutes later to leave the scores poised at 1-1 at the break.

But the hosts did not look back after Lynch netted again to put them in front on 51 minutes before Ellen Molloy added two more either side of the hour mark and Sinead Taylor made it 5-1.

Bates-Crosbie put Wexford out of sight of their opponents with two further goals in the closing stages.

Elsewhere, Galway WFC consolidated their hold of fifth place position after a 1-0 win over bottom side Treaty United thanks to Emma Starr's 62nd minute goal.

??GOAL FOR GALWAY - Emma Starr rifles it into the bottom corner from 25 yards out.

Cork City ended a run of three defeats in a row with a 4-1 win at home to fourth-placed DLR Waves to move up to seventh in the table.

Laura Shine scored a hat-trick, while Becky Cassin added another, with the Waves' only goal coming in the first half via Shauna Carroll.