Both sides had gone into the game level on points, with UCD ahead on goal difference. But Galway took control of proceedings before half-time through a Wilson Waweru goal on 38 minutes.

Mikie Rowe and Shane Doherty added to the advantage, before Dara Keane pulled one back for the visitors.

But Padraic Cunningham scored a fourth for Galway and John Caulfield's side go three points clear of Friday night's visitors.

Leaders Shelbourne remain 10 points clear at the top after their 2-0 win at Cabinteely which keeps them well on course for automatic promotion.

Georgie Poynton opened the scoring for Shels on 10 minutes, before Michael O'Connor added a second in stoppage time at Stradbrook.

Cabinteely are eighth, four points adrift of Cork City who played out a 0-0 draw in their all-Munster clash away at Treaty United.

The result at Markets Field takes Treaty within a point of third-placed UCD in the table, in the play-off places, while bottom side Wexford FC picked up their fourth win of the season with a 2-0 win at sixth-placed Athlone Town.

Jack Moylan scored a second minute opener for Wexford before Jack Doherty made sure of the points three minutes from time.

On Saturday, second from bottom Cobh Ramblers will host fifth-placed Bray Wanderers in a 7pm kick-off. 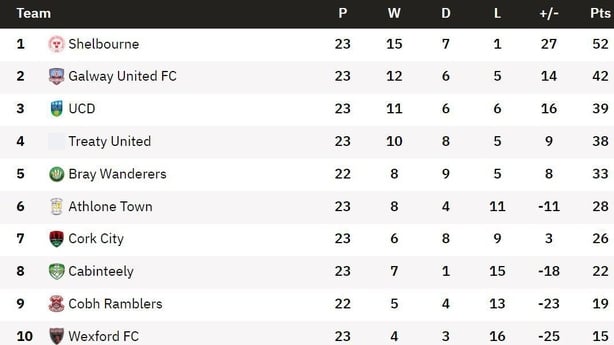