Manuel Lanzini fired West Ham to their first win at Old Trafford since 2007 as underwhelming Manchester United bowed out of the Carabao Cup in the third round.

Ole Gunnar Solskjaer's side were beaten semi-finalists in the last two editions and came into this match fresh from sealing a thrilling 2-1 Premier League win at the London Stadium when the sides met on Sunday.

But three days on it was David Moyes’ men celebrating as Lanzini secured West Ham a rare Old Trafford triumph and Carabao Cup progress as the hosts failed to turn a gamut of shots into a goal.

The Hammers had failed to win on their previous 17 trips to Old Trafford, with Carlos Tevez the last player to score a winner there back in May 2007.

This time Argentinian compatriot Lanzini did the damage, sweeping home after Ryan Fredericks roared past rusty Alex Telles on a night when the sides made a combined 21 changes.

Juan Mata hit the crossbar as the Red Devils looked to level in the first half and West Ham debutant Alphonse Areola helped keep Man United at bay in the second period as an avenue to a first trophy since 2017 closed.

The hosts had 27 shots but could not find a way through, with Andriy Yarmolenko hitting the post in a stretched end to the third-round clash.

It was a disappointing evening for the majority of the 72,468 at Old Trafford, where Solskjaer made 11 changes and Jarrod Bowen was the only survivor from Sunday’s meeting in east London.

The Man United left-back looked rusty on his return from an ankle injury and was breathing a sigh of relief after Bowen missed the target following his poor attempted challenge in the build-up.

Fredericks’ burst beyond the left-back and his deflected cutback from the byline was struck beyond Henderson by Lanzini in front of the Stretford End. 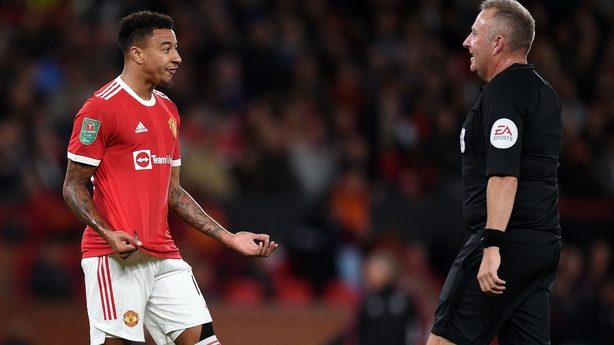 It appeared to act as a wake-up call for the hosts and Sunday’s match winner Jesse Lingard was furious referee Jon Moss did not award a penalty.

The former West Ham loanee went down in the box under pressure from Mark Noble, who was being teased by home fans after David de Gea saved the substitute’s late penalty on Sunday.

Jadon Sancho saw a shot blocked and Anthony Martial sent a deft touch bobbling wide after Mata’s cross-shot rattled the crossbar as the home side launched wave after wave of attack.

But, despite being under the cosh and forced to replace injured Fredericks with Vladimir Coufal, West Ham retained their lead heading into the break as Areola denied Lingard before Telles and Martial failed with attempts.

Solskjaer’s side returned from the break strongly and Mata delightfully clipped over for Sancho to hit an audacious volley from an acute angle off target, before Diogo Dalot rifled a low effort just wide.

Yarmolenko struck wide from 20 yards as West Ham threatened to extend their lead, with Solskjaer turning to substitute Mason Greenwood – a move that almost paid immediate dividends as he forced Areola into a smart stop.

The West Ham shot-stopper denied Lingard before Solskjaer introduced Anthony Elanga and Bruno Fernandes as the hosts attempted to turn the screw.

The latter bent wide from 25 yards and Areola blocked Martial as the match entered the final 10 minutes, with Man United leaving gaps at the back as they searched for a leveller.

Yarmolenko somehow hit the post having rounded Henderson in the 86th minute and two minutes later Noble was played in by Bowen, only for his first-time strike to be stopped by Henderson.

The Man United goalkeeper denied Bowen soon after but those missed chances did not prove costly as West Ham celebrated.