Jurgen Klopp hailed another impressive Caoimhin Kelleher performance for Liverpool and said it was "important" for the Cork goalkeeper to show Republic of Ireland boss Stephen Kenny just how good he is.

Kelleher made a brilliant save to deny Norwich City's Christos Tzolis from the spot when the Reds were 1-0 up in their Carabao Cup third-round clash on Tuesday night.

Liverpool kicked on to win 3-0, with Klopp thankful for Kelleher's heroics.

The 22-year-old is currently locked in a battle with Gavin Bazunu for the Irish No 1 jersey. Bazunu only got his chance because Kelleher last March was injured but he has excelled ever since. It means that Kelleher, the understudy to Allison on Merseyside, needed to make the most of a rare chance to shine on first-team duty at Carrow Road.

"Caoimhin is a top goalie," Klopp told Sky Sports. "It was important for him that his international coach can see he is really good.

"We started really well and I liked that - really aggressive, really lively, but then you could see we didn't train because we had to make a lot of decisions really late. The last line and the goalie saved us in these moments with speed, good challenges and stuff like that, so there was not really something in it for Norwich.

"It was all good, we scored the second and third goals and controlled the game, which was absolutely brilliant. The kids did exceptionally well, I have to say."

Reflecting on his decisive moment, Kelleher said: "I was happy to make the save. It came off my foot. Joe [Gomez] made a great block after that. I can't even remember [the penalty], maybe it was instinct." 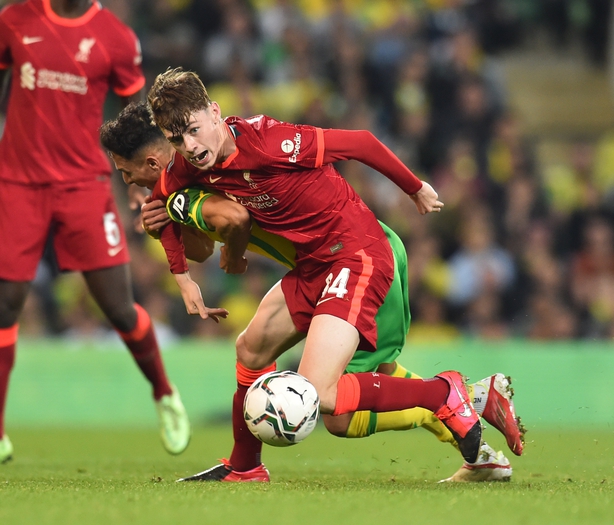 Liverpool made nine changes from the weekend win over Crystal Palace, with debuts handed out to 16-year-old Kaide Gordon and Co Tyrone teenager Conor Bradley (above).

"We are happy to have him around and we will treat him carefully because he is a big talent.

"Conor Bradley, first Northern Irish player since 1954, if someone had told me that I would play him sooner but super game and Tyler as well, so I am really happy."