Caoimhin Kelleher will be between the posts for Liverpool’s Carabao Cup trip to Norwich City tonight, desperate to make a good impression in a competition that has given him some great memories.

The 22-year-old Corkman made his first-team debut in the League Cup two years ago, impressing in a 2-0 third-round win at MK Dons.

In the next round he was the hero in a penalty shootout win over Arsenal after a remarkable 5-5 draw at Anfield. Kelleher’s flying save to deny Dani Ceballos from the spot settled a thrilling tie.

Since then he’s assumed the No 2 keeper slot at the Reds - ahead of Adrian and behind Alisson. Tonight he’ll get a precious opportunity to show what he can do.

"I think they were great learning experiences for me," he told the club website when reflecting on his past Carabao Cup games.

"Obviously my debut and the first few games, playing my first game at Anfield with the crowd and stuff, those experiences really stood out to me and I could learn off them. I played a few more games after that.

"For youngsters, it's a big competition for us as we know we'll get opportunities and game time. It's everything for us if we're involved and we want to win and give 100% when we get the opportunity to show that we're good enough and capable to play in more games. We're really looking forward to it.

"A Carabao Cup round-three game is probably to the public not the biggest of games, but to me it was probably the biggest game of my life and a big moment for me. The competition for us players, and when you get the chance to play, is really exciting." 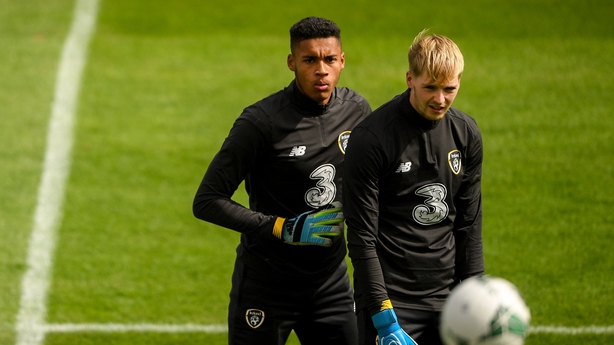 Kelleher has slipped behind Gavin Bazunu in the race to be the Republic of Ireland's No 1 but that’s a battle that may take a few more twists and turns in the years ahead.

Both men are exciting talents, though Bazunu’s loan moves to Rochdale and Portsmouth have given him the edge in terms of regular first-team minutes.

Kelleher will hope a solid showing at Carrow Road tonight will strengthen his hand for club and country.

"It's a great opportunity for every player to put in a good performance and get in the manager's head for the next few games," he added.

"There's a lot of games coming up, so changes will be made. We just have to put in a good performance and go from there."

He could square up to compatriots Adam Idah and Andrew Omobamidele tonight - and though Kelleher did not feature alongside those two in the recent qualifiers against Portugal, Azerbaijan and Serbia, Ireland boss Stephen Kenny did suggest the keeper will get his chance again soon.

"Caomhin is a real talent as well and Mark Travers is doing well at Bournemouth," said Kenny.

"We have two games coming up against Azerbaijan and Qatar next month [October]. Caomhin could feature against Qatar.

"They are two good prospects and it's good to see them doing well."