Vera Pauw and the Republic of Ireland players must deliver results now according to RTÉ Soccer analyst Lisa Fallon, as a losing run of seven games comes into focus ahead of the start of a new qualifying campaign.

Ireland had looked to be on course for qualification for a major championships for the first time early in their last campaign until results deteriorated in the bid to reach Euro 2021.

While Ireland were facing high-calibre opposition in most of the games, dropped points against Greece, Iceland and Ukraine were costly.

Tomorrow Pauw's side face Australia in a friendly at Tallaght Stadium before their first World Cup qualifier against a strong Sweden side.

The next run of games will then be more favourable opposition but Fallon wants to see Ireland turn a corner.

She told the RTÉ Soccer Podcast: "At this level, and I've said it before when it comes to the men's team, it's all about winning and doing everything you can with the players you have to achieve results.

"Ireland have played against tough opposition but at the same time it is important to get wins and positive results. That is for team morale, progress and to show what you're doing with the team.

"Even as a coach you want to see if what you're doing is working and the best measure is performances and they have to turn into results.

"The games Ireland have had over the last two years - in most of them we'd be expected not to win. The likes of Germany, Denmark, Belgium. Now is the time we have to see those performances transfer into results in the qualifying campaign

"You can't get away from the feeling the last campaign was one that got away. The results against Ukraine and Greece defined that campaign and they were teams we should have beaten. We know we should have done it because the likes of Northern Ireland qualified and they beat Ukraine 4-1 on aggregate." 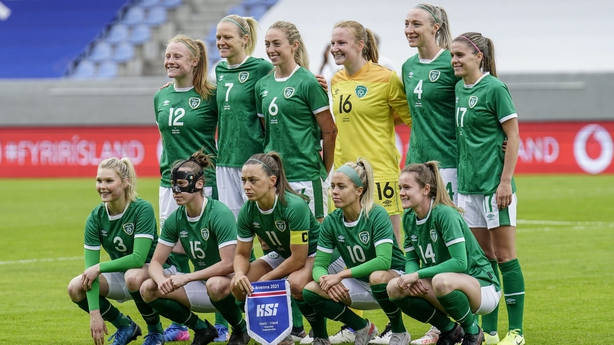 Fallon feels the game has progressed off-the-field for Ireland, with the new sponsorship agreement with Sky and an equal pay agreement, and Pauw also has the experience of an entire qualifying campaign to use now.

The Galway United coach has pointed to an inability to perform well over 90 minutes as a key area to improve in this time around.

She added: "I can't accept the Republic of Ireland can't beat Ukraine when Northern Ireland can. At this point we do have to start seeing results, albeit Australia are a top-ranked team and again they will be really stellar opposition. They'll be good opposition to prepare for us for Sweden next month in the World Cup qualifiers.

"Irish teams have always been able to get results throughout the years against big teams. I'd like to see us get to that point and get a result against Australia or Sweden and then we move those results into the next three games which are really, really going to be absolutely crucial.

"In the Iceland games for example, we were good in one half and poor in another. We have to start seeing consistencies in performances and the identity of the team. Vera has been there a long time and she has a really good staff around her. At some point the good performances have to translate into results. That's the piece we need to see. To be fair to the players, it has been a tough time over the Covid-19 period with supporters. We will that back on Tuesday and the same for Sweden.

"You get to a point where you have a campaign under your belt. Vera, to be fair, had a lot of learning to do, with the players available, strengths and weaknesses, what type of system she felt suited the team.

"Now, with a couple of years under your belt, a massive amount of friendlies played, and fans back, you're almost at the point of no excuses.

"You have to hit the ground running and get the performances consistent and results. This team and squad is 100% good enough to be going enough to a major championship.

"I firmly believe that. There's still a bit of me gutted we won't be at the Euros next year as it was a massive missed opportunity."

Tomorrow’s friendly will certainly be about formulating a starting XI and approach for the daunting Sweden games.

Regardless of the difficulty they will bring, Fallon thinks Ireland are good enough to progress.

The Swedes secured a 1-0 win over Slovakia in their opening match, while Ireland’s game in Georgia was postponed until next summer.

Finland are the final team in Group A, and second place will secure a play-off spot.

Fallon is backing Ireland to at least secure such a position.

She concluded: "With the opposition we face, yes Sweden are a very good team, but all the other teams are ones Ireland can and should be able to beat and get good results. I really believe we can get out of this group."