Liverpool midfielder Thiago Alcantara will miss the next two matches after picking up a calf injury over the weekend, the Premier League club said.

Thiago was substituted in the second half of the 3-0 win against Crystal Palace and assistant manager Pepijn Lijnders said he would miss Tuesday's League Cup game at Norwich City and Saturday's league clash at Brentford.

"I can't say now how long it will take but definitely not tomorrow and not at the weekend," Lijnders told the club's website.

"Let's get the scan results back and we have a proper diagnosis. A shame as well because he was taking the game by the hand, he was a proper playmaker in my opinion. A shame that we miss him."

Thiago is the second midfielder Liverpool have lost to injury in recent matches after Harvey Elliott broke his ankle against Leeds United and needed surgery. 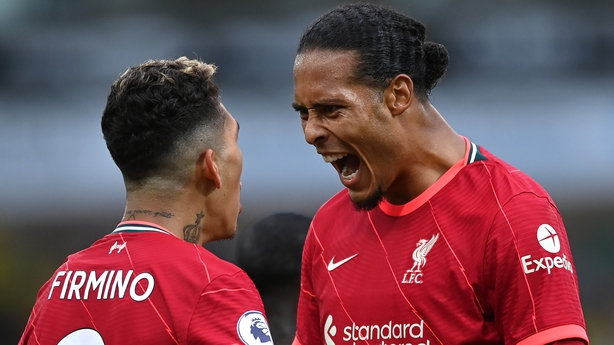 A serious knee injury kept Van Dijk sidelined for most of last season and this year's European Championship, from which the Netherlands were eliminated in the last-16 by the Czech Republic.

Liverpool's defensive linchpin Van Dijk was rested for their 3-2 Champions League win over AC Milan, but the 30-year-old returned for Saturday's 3-0 Premier League win against Crystal Palace at Anfield.

"I think it (rotation) is obviously important. The positions we got into last year, we were unlucky with injuries and players having to play out of position. I think it is to help with things like that."

Liverpool were hit with a string of injuries to key players last season as they finished third, failing to defend their Premier League title.

The Merseyside club, who are joint top of the Premier League this season with Chelsea, next travel to Norwich City on Tuesday for the League Cup third round.