Shamrock Rovers extended their lead at the summit of the Premier Division to six points as they saw off Sligo Rovers at the Showgrounds.

Rory Gaffney's eighth goal of the season secured the win in in the 26th minute when he capitalised on an Ed McGinty slip-up. The defeat sees the Bit O’Red remain in third spot, five points off second placed St Pat’s.

With two wins on the bounce in the last eight days, Liam Buckley was forced to make two changes to the team that overcame Dundalk on Tuesday night. Walter Figueira and Colm Horgan coming in for injured duo Johnny Kenny and Lewis Banks.

The visitors arrived in the north-west with just one win in their last five in all competitions. Manager Stephen Bradley making just the single change from their win over Waterford with Lee Grace taking Aaron Greene’s place.

Leading at the break, it was Shamrock Rovers who had the better of the opening half. 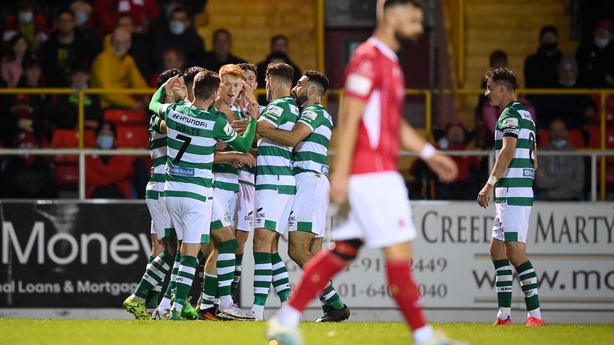 Barry Cotter responsible for the game’s opening chance when he fired straight at Sligo goalkeeper McGinty from twenty yards after Gaffney’s cross was recycled out to the full back.

The Tallaght side went close again just short of the quarter hour.

Gary O’Neill and Richie Towell both involved in supplying Gaffney whose initial effort was repelled by McGinty. Towell will feel he might have done better with the follow up as he could only volley over the Sligo crossbar from the angle.

Sligo did come up with the odd question for the Hoops in the first 45.

Colm Horgan’s glancing header from a Greg Bolger set piece had Alan Mannus worried, but the Northern Ireland international was content to allow the ball over his crossbar.

The opener then arrived in the 26th minute.

McGinty could only parry O’Neill’s shot into the path of Gaffney who steadied himself before slipping the ball between the Sligo net minder’s legs.

McGinty was equal to Ronan Finn’s shot twelve minutes later as the Dubliners looked to make themselves even more comfortable going in at the break. McGinty was called upon again, this time denying Gaffney’s attempt to squeeze the ball between him and his near post.

Liam Buckley’s side did produce another effort of note before half-time. Mannus, who conceded to Walter Figueira in the side’s first meeting in Sligo this season, denied the ex-Derry man this time as he got both hands behind Figueira’s low strike after the Sligo player had made the space for himself at the edge of the area.

Gaffney again went close with his head moments after the re-start, while Bolger’s side-footer against his former employers fizzed narrowly wide of Mannus’ post at the opposite end.

McGinty was almost caught out by the bounce of the ball in the 21st minute of the second half. The Irish underage international scrambling to push away Gaffney’s drive from out wide as the Hoops remained in control of things.

Sligo’s Garry Buckley went within inches of an equaliser when he met David Cawley’s corner from the left on 69 minutes. While Towell blazed over with a right-footed effort despite the ex-Dundalk playmaker having plenty of time and space on the perimeter of the Sligo box.

Sligo substitute Melvyn Lorenzen had a late chance for the hosts, but could only watch on as his strike came off the outside of his left boot.