Ivan Toney inspired Brentford to their first away win in England's top flight for 74 years with victory at Wolves.

Toney almost moved to Molineux from Northampton as a teenager in 2014, the move collapsing when he failed a medical, so it was perhaps inevitable he would star as Wolves slumped to a fourth straight home Premier League defeat.

The 25-year-old had a goal, an assist and two disallowed in the first half alone as a clinical Brentford side got their first top-flight win since beating Leeds 2-1 in 1947, with Bryan Mbeumo also on target.

A second-half red card for Shandon Baptiste threatened to spoil Brentford's afternoon, but, even though Wolves finished on top, they failed to score for a fourth league match out of five this season.

When Brighton’s Leandro Trossard netted a 90th-minute winner last week it ended a 15-game unbeaten league run for Thomas Frank’s side, but there was no apparent loss of momentum in the way Brentford attacked the first half.

Toney had the ball in the net with only nine minutes gone, although there was no need for a VAR check to see that Mbeumo had strayed offside before playing the ball in.

Instead the visitors punished defensive mistakes from Wolves to take a commanding lead before the break.

Marcal hauled Toney to the ground as a corner was floated in and the striker kept his head throughout lengthy Wolves protests before sending Jose Sa the wrong way from the penalty spot.

He appeared to strike again moments later after some chaotic defending from Wolves, neatly backheeling home on the volley from point-blank range. The flag went up for offside, but after a lengthy VAR check the goal was instead ruled out for a handball in the build-up. 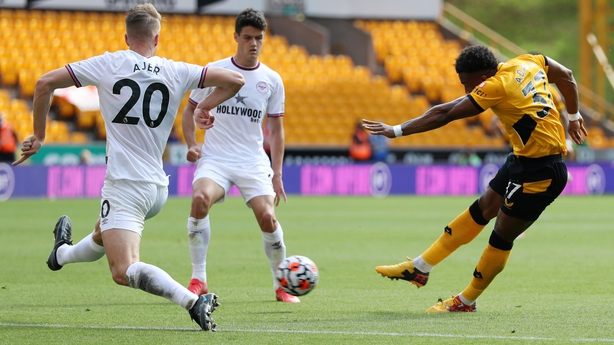 Wolves went up the other end where Adama Traore’s deflected effort cannoned back off the crossbar – as close as they came in a first half in which they failed to register a shot on target – but soon found themselves 2-0 down.

Nelson Semedo made a mess of dealing with David Raya’s long kick and Toney raced away to play a low ball across goal for Mbeumo to tap home at the far post.

Wolves boss Bruno Lage had named the same starting line-up for a fourth game in a row, hoping that last weekend’s 2-0 win at Watford marked a change in fortunes for a side he believed were not getting the results their performances deserved.

But he had seen enough by half-time and sent on last week’s goal-scorer Hwang Hee-chan to replace Romain Saiss.

The change in shape to three up front had the desired effect as Wolves began to get at a Brentford defence which had stood firm for 45 minutes.

Hwang got the home fans off their feet when he chased a seemingly lost cause, slipping the ball through the legs of Pontus Jansson and skipping around the Bees captain before seeing his cross cut out.

Wolves received a helping hand in the 65th minute when Baptiste collected a needless second yellow card for hauling down Francisco Trincao and the balance of play shifted.

Kristoffer Ajer celebrated as though he had scored after making a goal-saving tackle to deny Hwang in front of goal.

Hwang was almost in again in the 74th minute but Jansson poked the ball away before Raya made two superb saves to deny Ruben Neves and Hwang again, unaware the flag was already raised for offside.

Frank was shown a yellow card for arguing over a throw-in decision as tempers frayed moving into the last 10 minutes, but it was his side who went closest to scoring again when Mbeumo saw a shot come back off the crossbar as time ticked down.