Paris Saint-Germain started with Lionel Messi, Neymar and Kylian Mbappe in attack but had to settle for a point in a 1-1 draw at Club Brugge.

Mbappe provided the assist for Ander Herrera to score his maiden Champions League goal for the away side, who saw Hans Vanaken level.

Meanwhile, England midfielder Jude Bellingham was the star of the show as Borussia Dortmund began their Group C campaign with a 2-1 win at Besiktas.

The 18-year-old’s smart control and finish gave Dortmund the lead before he set up Erling Haaland to double the visitors’ advantage in first-half stoppage time, while Javi Montero headed in a last-gasp consolation for Besiktas.

Haller had the visitors two up inside the opening 10 minutes before Paulinho pulled one back.

Steven Berghuis re-established the two-goal cushion as Haller then completed his hat-trick and added a fourth just after the hour.

Real Madrid secured a late 1-0 win over Group D heavyweights Inter Milan as Rodrygo struck with a minute to go at the San Siro, while Sheriff Tiraspol were victorious on their Champions League group stage debut – Adama Traore and Momo Yansane scoring either side of half-time for a 2-0 win over Shakhtar Donetsk. 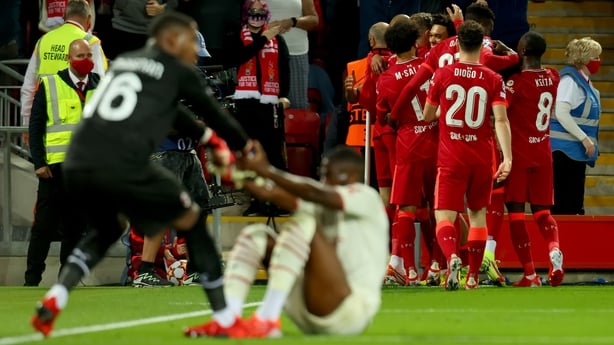 Henderson's fine second-half strike earned a 3-2 victory for Jurgen Klopp's side, who had looked set to run away with the game early on.

An own goal from Fikayo Tomori and a saved Mohamed Salah penalty did not tell the whole story as Liverpool dominated – only to be struck by two goals in less than two minutes just before the break as Ante Rebic and Brahim Diaz shocked Anfield.

Salah would make amends for his missed spot-kick as he stayed onside to turn home a Divock Origi pass to equalise before Henderson’s effort settled the contest.

The win gives Liverpool an early advantage in Group B as Atletico Madrid and Porto played out a goalless draw in Spain – where Chancel Mbemba was sent off late on for the visitors.

Christopher Nkunku hit a hat-trick for the visitors but City were always slightly on top and ran out 6-3 winners.

Nathan Ake had put the hosts ahead before Nordi Mukiele’s own goal doubled the lead.

Riyad Mahrez’s penalty restored a two-goal lead after Nkunku’s first of the night and he would strike again before Grealish then finished well.

Nkunku completed his hat-trick to once again get the visitors within one goal before Pep Guardiola’s men finally accelerated clear through Joao Cancelo and Gabriel Jesus.