Belgium hitman Lukaku bagged his third goal in two games and his fourth for Chelsea since his €114million switch from Inter Milan.

The 28-year-old converted captain Cesar Azpilicueta’s hanging far-post cross with a header of stunning accuracy, and that after shrugging aside three touch-tight Zenit defenders.

Chelsea laboured past a resolute and regimented Zenit, for much of the match running the risk of limping to a dispiriting draw.

But then Lukaku rose up, highest of all, to nod home and turn the night entirely.

Both Chelsea and Lukaku have been clear from the start: the Anderlecht product has come to west London to score goals and win matches.

So far, so very good for the talismanic striker.

Last season Chelsea would have drawn this match. Lukaku's prowess and presence have already delivered a major impact, with the Blues’ rivals in all competitions taking ominous note.

Had Artem Dzyuba slid the ball home for Zenit from mere yards out late on the tie would have harboured a very different hue.

Thomas Tuchel received his UEFA manager of the year gong for last term, with Edouard Mendy presented his trophy for goalkeeper of the year.

Jorginho finally got his hands on his player of the season silverware too, as the Blues paid reverence to last term’s Champions League triumph. 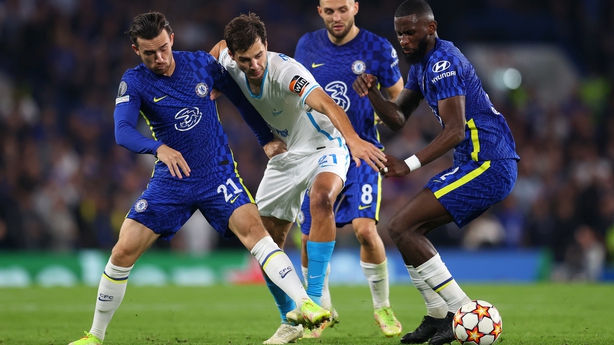 UEFA figurehead Aleksander Ceferin was on hand to dole out the pre-match prizes, and an entirely underwhelming first-half proved a true case of after the president’s show.

Chelsea could not convert their general comfort into genuine openings, leaving Stamford Bridge to a man frustrated at the interval.

Try as they might the Blues could not carve open Zenit’s regimented defence.

The visitors ultimately had the most credible half-chance before the break despite minimal possession. Reece James lifted the ball off Claudinho’s toe, however, to ease the danger.

Hakim Ziyech struck Chelsea’s first shot on target shortly after half-time, but it took a mammoth run from Toni Rudiger to lift the crowd.

The Germany defender cantered 70 yards into the Zenit box, before lashing a shot wildly wide. Once the gritty centre-back had found that position, he should truly have hit the target.

But the resolve to run all but the length of the field proved enough to get the home faithful on their feet.

Mateo Kovacic threaded a lovely ball to Ziyech but the Morocco forward could not pick out anyone in the centre of the box.

James then tiptoed around the back of Zenit’s defence but could not test Stanislav Kritsyuk in the visitors’ goal.

As Chelsea pressed and lost an edge of control, Sardar Azmoun almost sneaked through on goal – with Rudiger required to blast away to safety.

Just as Chelsea’s nerves started to twitch for a breakthrough though, up popped Lukaku with a fine headed finish.

Not even the posse of three Zenit defenders swarming him could deny Lukaku however, with the talisman striker nodding the ball out of everyone’s reach and into the net.

Replacement forward Dzyuba should have found the net when sliding in towards a low centre that left him in a heap with Mendy.

His miss proved the closest Zenit could come to opening up the Blues, with the hosts negotiating the final stages to seal the win.