Wexford have not slipped up since Tom Elmes left to take charge of the Republic of Ireland Women's Under-16s and remain unbeaten since the opening day of the season after a comprehensive win in Limerick.

Even with several players having departed throughout the season, Wexford have never looked like being knocked off their stride. And that was no different here in Jackman Park as their collective quality won the day.

Sinead Taylor, Kylie Murphy and Ciara Rossiter scored in a very one-sided first half, before Aoibheann Clancy - arguably the leading contender for the Young Player of the Season award - added a fourth goal in the second period.

Treaty fought hard and their efforts were admirable, but Wexford's attacking play was just too much for them to contend with on a day when the visitors went away with the victory, and are back within four points of leaders Peamount. 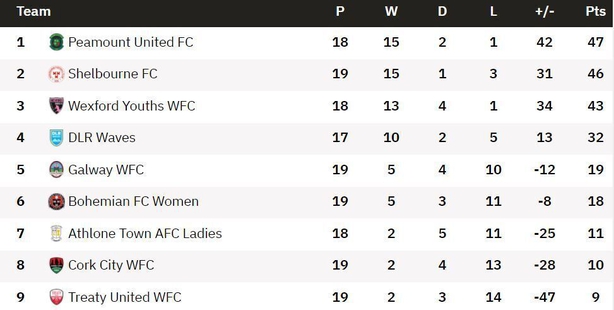 Revenge was on the minds of DLR Waves having been dumped out of the EVOKE.ie FAI Women's Cup by Galway last weekend and they made sure that they got it.

Jetta Berrill's nice finish got them moving in that direction as the Dublin outfit withstood an early barrage of pressure from Galway, who looked the more likely to break the deadlock.

Berrill then turned provider for Rachel Doyle to make it 2-0. Galway had hardly had time to catch their breath from the first goal and they were now two down with a long way back.

The comeback never materialised even though Galway did play some nice football, but DLR stood firm to pick up a deserved win.