Sligo Rovers put an end to their recent winless streak with an impressive win over a disappointing St Patrick's Athletic at the Showgrounds.

Johnny Kenny netted an early penalty for the Bit O'Red, while Ryan De Vries followed up with Sligo’s second before the break with a thunderous drive from distance.

With no win in their last eight and looking to cut the gap to the top two to eight, Rovers started this game in the best fashion possible.

Homegrown hero Kenny confidently dispatching his third minute spot kick after John Mahon felt a push from a Pat's defender as he tried to latch on to Lewis Banks' flick on from Greg Bolger's set-piece.

Sligo Rovers 1-0 St Patrick's Athletic: Here's how the hosts took the lead at the Showgrounds, with John Kenny dispatching his spot-kick in emphatic fashion. pic.twitter.com/dgblwjLa9W

Kenny was the creator this time as Sligo nearly doubled their lead four minutes later. A defender's finish from the roaming Banks saw the full-back totally miscue his first time strike from Kenny's cross, after trojan work down the left from the Rovers youngster.

David Cawley's corner bounced off the top of Vitezslav Jaros' crossbar on 12 minutes. But the Dubliners, who suffered a sluggish start, should have levelled the game nine minutes later.

Rovers goalkeeper Ed McGinty could only push Billy King's effort into the path of Mattie Smith, but the ex-Waterford winger side-footed the subsequent effort over the Sligo crossbar from close range.

McGinty was called into action again when he had to shift his weight at the final second to get enough in front of an Alfie Lewis strike.

Liam Buckley's charges then extended their advantage moments before the break. De Vries unleashed a mammoth effort from 25 yards for his second goal of the year to double Rovers' lead.

Jaros scrambled to keep out De Vries 20 minutes into the second half as Sligo almost profited from a slick counter.

Kenny and Andre Wright were involved as De Vries, who could have gone one more and played the ball into the path of the incoming Adam McDonnell, decided to go it alone but could only smash the ball straight at the Czech stopper.

Pat’s turned up another great chance to put Sligo under the cosh with 19 to go. Darragh Burns fired over after from 10 yards having done all the hard work in the lead-up.

Chris Forrester, subdued up to this point, wasn’t too far off with his first-time effort from the angle after the ball fell to the Saints’ playmaker at the corner of the penalty area.

But Sligo ran out two-goal winners to move within eight points of tonight's opponents. 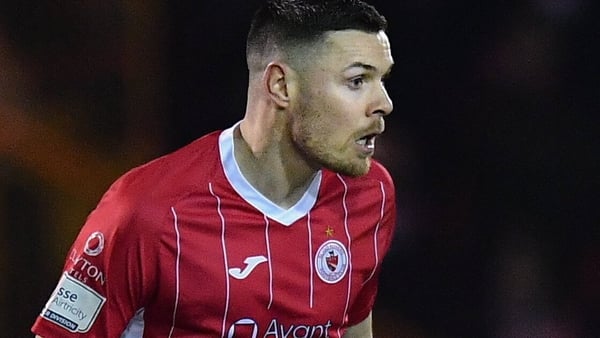