Italy recorded their first win since being crowned European champions as strikers Moise Kean and Giacomo Raspadori inspired a crushing 5-0 win over Lithuania to strengthen their grip on top spot in World Cup qualifying Group C.

The two 21-year-olds impressed their manager by lighting up the first half, as Kean netted twice either side of an Edgaras Utkus own goal and Raspadori, making his first start for his country, also scored.

It was the first time Italy, who endured frustrating draws against Bulgaria and Switzerland in their previous two qualifiers, scored four goals in the first 30 minutes of a match.

Giovanni Di Lorenzo inadvertently added a fifth when his second half cross-shot nestled in the bottom corner, as the Azzurri side comfortably extended their record international unbeaten run to 37 matches.

Elsewhere in the group, Bailey Peacock-Farrell's penalty save earned Northern Ireland a 0-0 draw against Switzerland at Windsor Park.

Winger Leroy Sane scored one goal and made another as Germany made it three wins in a row with a resounding 4-0 victory over Iceland in Group J .

The Germans took the lead in the fifth minute when Sane played in Serge Gnabry to score, and after a lengthy VAR review for a possible offside, the goal stood.

The visitors added a second 20 minutes later when Antonio Rudiger was left unmarked to score with a header from a Joshua Kimmich free-kick.

Iceland almost pulled one back at the start of the second half when Johann Berg Gudmundsson's curled effort hit the post and Albert Gudmundsson fired home the rebound, but he was offside in the build-up and the goal was chalked off.

A constant threat with his quick dribbling and precise passing, Sane effectively killed the game off when he rifled the ball into the roof of the net after another flowing German attack 11 minutes into the second half.

After a shaky start to qualifying, including a shock 2-1 loss to North Macedonia in March, the Germans have rediscovered their scoring touch, but were still guilty of a few glaring misses.

Kai Havertz wasted a three-on-one opportunity by firing narrowly wide with the goal at his mercy and Timo Werner somehow failed to put Lukas Klostermann's pass into an empty net.

Werner made amends by adding a late fourth that hit the left-hand post and bounced out before spinning back across the line to round off an encouraging team performance.

Armenia and Liechtenstein drew 1-1, and North Macedonia and Romania played out a scoreless draw in the other games in the group. 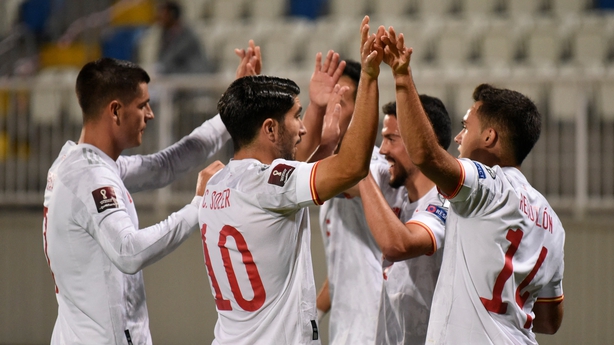 Goals from Pablo Fornals and Ferran Torres earned Spain a 2-0 victory away to Kosovo in Group B on Wednesday and dragged them back into automatic qualification contention.

Fornals produced a fine near-post finish from the angle on 32 minutes after smart build-up play from Carlos Soler and Alvaro Morata.

Spain dominated the ball for large swathes of the game, but were almost undone on numerous occasions as their high defensive line was exploited by the hosts.

They were indebted to profligate finishing, in particular from Vedat Muriqi, who ran clear on goal but put his shot wide of Unai Simon's left-hand post.

Simon then almost gifted the hosts an equaliser as he raced out of his box to meet a long ball over the top, only to get in a muddle with Inigo Martinez.

The Athletic Bilbao stopper was just able to scramble back and stop Florian Loshaj's goalbound effort to keep Spain ahead.

It proved a crucial save as Torres went on to seal the win in the 90th minute from a counter-attack. After initially being flagged offside, the goal was awarded following a VAR check.

Luis Enrique's side moved clear at the top of the group on 13 points from six games, four ahead of Sweden who have played two matches fewer.

Dennis Praet's first-half goal secured a narrow 1-0 away win for Belgium over Belarus in Kazan to move them closer to World Cup qualification.

The midfielder’s 33rd-minute strike maintained Belgium's unbeaten run in Group E as they advanced to 16 points, nine points ahead of the Czech Republic, who have played one game fewer, and Wales, who have two games in hand.

Wales' qualification hopes were dented on the night by a 0-0 draw against Estonia in Cardiff.

Estonia, ranked a lowly 110th in the world and sandwiched between Guinea-Bissau and North Korea, were bottom of of the group having conceded 15 goals in three games.

But Wales failed to break down stubborn visitors on a night when even skipper Gareth Bale, who was winning his 99th cap, was unable to rescue them a win.

Adam Szalai and Endre Botka grabbed the goals that earned Hungary a 2-1 win over Andorra in Budapest, while Albania drubbed San Marino in Group I in the other match in Group I.