FIFA's proposals for a shift to a biennial World Cup, which could see the tournament held in the same year as the Olympics, have been given a cold response from the International Olympic Committee (IOC) president Thomas Bach.

Bach declined to state whether his organisation had been part of the consultation being carried out by FIFA, whose president Gianni Infantino is a member of the IOC.

Bach said he did not want to "put fuel on the fire" of the debate within football, but added: "The consequences or potential consequences are becoming clearer day by day thanks to the discussion within FIFA and in particular through the contributions of continental associations"

"We are closely monitoring these discussions, and find them very interesting," he said with a smile.

Infantino continued his push for changes in the international match calendar, holding a meeting with ex-players in Doha, Qatar on Wednesday.

The FIFA president said that change was needed because there were too many meaningless games and that such a structure was unsustainable for the health of players and the global game. 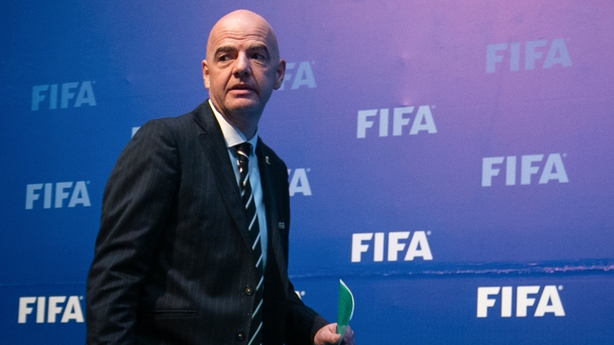 Infantino said that it was difficult for players - especially during the Covid-19 pandemic - to leave their clubs and keep travelling from one country to another.

"The current match calendar shows us that we have reached some limits... we have to have a system that is simple, which clearly defines when there are national team games and when there are club games," he said.

The ambitious plans of soccer's global governing body for a World Cup every two years have come in for fierce criticism from various stakeholders, including UEFA, clubs, players and fan groups.

Critics have pointed to the already-packed annual schedule and argued that a showpiece event like the World Cup would be significantly diluted if held biennially.

Infantino, however, reiterated that 88% of the member associations had voted in favour of the feasibility study, which was first proposed by the Saudi Arabia Football Federation and is being led by FIFA's chief of global football development Arsene Wenger.

The controversial idea has found support among the African Football Confederation and several countries in Asia.

"It's crucial to understand what the consultation process is... that's what we are doing: studying the calendar, consulting everyone, starting of course with the protagonists of football, the main actors of football -- the players, the coaches."

World Leagues Forum, the association that represents all major professional leagues, said in a statement: "The World Cup... is a unique sporting event. FIFA's leadership cannot be able to turn something exceptional into a commonplace event purely to serve their short-term interests."

Despite the protests, Infantino added that a new match calendar is likely to be in place by 2024, when the current men's cycle ends.

"This global process is exhaustive... so by 2024 we need to have a new match calendar. That's why we need to take some decisions by the end of this year."