It took a record-breaking Cristiano Ronaldo goal in the 89th minute and another in the sixth minute of injury-time to deny the Republic of Ireland a historic victory in their World Cup qualifying clash with Portugal at the Estadio Algarve.

It was a night of real drama on the Iberian Peninsula as Ronaldo had his 15th-minute penalty saved by young Ireland goalkeeper Gavin Bazunu.

Ireland then caused their own fireworks just before the break as John Egan headed home the game's opening goal from a Jamie McGrath corner.

But the returning Manchester United man would have the final say as he recorded his 110th international goal to break the world record as his powerful header beat Bazunu.

And then the Portugal captain broke Ireland hearts with a 96th-minute winner, rising majestically at the back post to head home a remarkable winner.

There was early pressure from the home side, as expected, not from slick passing and movement but rather from two corners, which Ireland dealt with.

Stephen Kenny's side looked to get their foot on the ball and had a chance to knock it around, however, Portugal were alert to the tactic and maintained a high press to stop the ball coming out of the half.

Ireland appeared determined to stick to their guns and it backfired spectacularly after 10 minutes as a short kick-out went drastically wrong and led to a penalty as Jeff Hendrick ended up stretching for the ball and took Bruno Fernandes down inside the box.

Ball or man first, it was not immediately evident, however, the referee pointed to the spot and when called to the side of the pitch to view a range of angles of the incident, he eventually stuck with his initial decision.

It was a chance for Ronaldo to claim the all-time international goal-scoring record, but when he finally stood up and struck the ball, Bazunu read his intentions, dived to his right and batted the ball clear.

Amidst the madness, Ronaldo slapped Dara O’Shea for kicking the ball off the spot, yet his petulance was not punished.

A lively few minutes after the penalty as Portugal looked to make amends but Ireland defended well and even had occasion to move forward themselves, without much success it must be said.

But Ireland started to grow into the game and in the 23rd minute, a Pepe mistake almost allowed Connolly in on goal, but the former Real Madrid man got back around to clear.

A chance arrived for Ireland from a corner two minutes later as the ball missed the first defender and Shane Duffy had a chance to hit a reflex volley, but miskicked. The ball popped up for Connolly but he scooped it over the bar.

Portugal continued to cause trouble and again worked a chance on goal after Hendrick was dispossessed in midfield. With numbers forward, Bernardo Silva hit one from the edge of the box, but Duffy threw himself in path of the ball and made a vital block

Another Connolly chance went abegging following good hold-up play by Adam Idah in the 27th minute, before Portugal were back on the attack, and this time it was the post that saved Ireland as Jota’s back-post header crashed off the woodwork.

Ireland were then forced to make a change as Dara O’Shea suffered a nasty ankle injury. Initially it looked like it may have been broken but the West Brom man was able to get to his feet and hobble off the pitch.

Norwich youngster Andrew Omobamidele was sent into the fray in a straight swap as Kenny opted against moving Coleman or Doherty inside, and there was a logic to it as both wingbacks had been enjoying lots of success up their respective flanks.

A great spell followed for Ireland with Coleman and Doherty both getting up and involved as Kenny's experimental side kept the ball inside the Portugal half with Idah and Jamie McGrath showing well and moving the ball at pace.

Connolly was finally found, and the young striker had a chance to test the keeper but he blasted over when a caressed effort was called for.

Portugal finally got up the pitch and worked another effort on goal as Jota shot from close range in the 41st minute, but the new man in, Omobamidele, stood firm and headed clear.

Connolly was again in on goal in the 44th after a sublime ball was lifted into his path from Josh Cullen.

Inside the box, the Galway man took too long to make up his mind and then tried to thread it inside, but numbers were back and the ball was cleared.

And then the deadlock was broken.

The resulting corner was sent into the near post with pace from McGrath out on the left, and Egan timed his run to perfection before glancing the ball past Rui Patricio and into the far corner.

Over six minutes of injury time had to be played as a result of the early stoppages, however, Ireland held firm throughout as the home side looked to immediately hit back, and while Jota’s shot was spilled and then saved, Ireland would lead at the break.

Portugal made a change at the break as Rafa Silva was replaced by namesake Andre, and they piled the pressure on Ireland in the opening stages of the second period.

Despite the amount of play inside the Ireland final third, the keeper was not tested and then it was Ireland back on the attack as they opened the home side up again in the 53rd minute as Connolly timed a run to perfection to race into the box.

Twice he had a go at the last man, but both times he was thwarted and despite looking for a penalty the Irish striker went down way too easily.

A Fernandes shot from the left had Bazunu scrambling across his goal and while the ball hopped wide of the post, the keeper looked to have it covered.

A real penalty shout then arrived for Connolly as Egan worked the ball into his path inside the box and while he looked to be impeded as he shot wide from close range, VAR deemed it a fair challenge.

Two more changes for Portugal as the home side started to pound the Irish back line, but again it was all kept under a certain amount of control from the Irish defence, with the only real shots on goal coming from distance and failing to cause Bazunu much trouble.

In the 70th minute, Bernardo Silva skipped past two challenges inside the box and let fly from about 12 yards out, however, his shot was blocked by Idah, back helping out his defence.

And then four minutes later, Silva should have scored as he got on the end of a Ronaldo cross before cutting back inside Doherty with the goal at his mercy. Bazunu made himself big as he looked to close down the shot and it may have distracted the midfielder as he crashed the ball over the bar.

Inside the final ten minutes, Portugal kept the pressure on as substitute Silva looked for the spectacular however his bicycle kick flew high and wide. Even Ronaldo looked panicked at this stage as he cut in off the right and drilled a long-range effort way over the bar.

Two more chances were repelled but Portugal were getting closer and the equaliser finally arrived as the pressure proved too much when Ronaldo arrived onto a perfect cross from the right to nod home, low to Bazunu’s left.

James McClean then had a shot from a quick break a minute after the goal but it was well saved as Ireland then went back into defensive mode for the five minutes of added time.

The five minutes were negotiated but the referee left the clock ticking and the inevitable arrived as the Portugal captain played his starring role to perfection to again rise up in the box and head home the winning goal in the 96th minute.

It was virtually the last play of the game as all Ireland’s endeavours led to nothing but a morale-boosting performance to take into the upcoming games with Azerbaijan and Serbia. 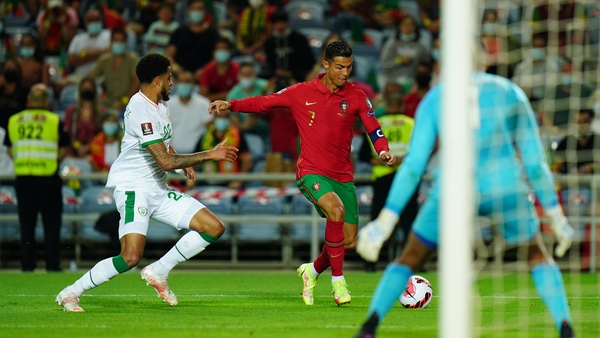