An Andy Lyons scorcher as extra-time approached decided a last-16 FAI Cup Dublin Derby that was a throwback to old times, with Bohemians coming out on top 2-1 against Shamrock Rovers.

The game ended to Bohs fans belting out 'The Auld Triangle' and dreaming of a fourth visit to the Aviva Stadium in 2021. It felt at times more like the noise of a crowd closer to 8,000 than the official 800, with the home fans sensing this was a good time to face their bitter foes, who began the week fighting wars on three fronts only to end it fighting one.

The warm week was reflected in the Dalymount surface being a little more bumpy than is normal this time of year. The ageing nature of the Rovers team looked an issue in their recent European struggles and Finn, 33, didn't have the legs of old to outpace Dawson Devoy ten minutes in.

Devoy's interception had the home fans in great and giddy voice; soon afterwards, another Hoops veteran in Joey O'Brien was lucky not to see yellow.

Bohs were lucky not to go behind 12 minutes in. Richie Towell and makeshift left-back Aaron Greene did well before a stunning Graham Burke strike came back off the post, James Talbot beaten.

Despite their absentees, Rovers played some lovely football in the first quarter, with Bohs struggling to fashion a chance. Chris McCann outshone Dawson Devoy.

A rare loose Keith Buckley pass allowed Burke to play Rory Gaffney in but Ciaran Kelly wrestled the ball back.

The first half concluded without a goal. It was at once cagey, lacking quality at times yet absorbing. Right at the death, Sean Gannon brilliantly headed away from a superb Coote cross.

There was drama at the interval as Bohs' goalkeeping coach Chris Bennion had a war of words with Stephen Bradley going off the park. Bradley's assistant Glen Cronin then squared up to Bennion, with the highly unusual spectre of one Philly McMahon playing peacemaker!

After the restart Devoy was chopped down by McCann and Coote's free had Alan Mannus scrambling. 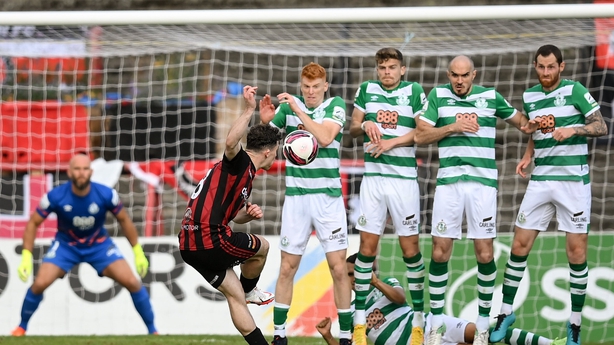 The opener was worth the wait. Ronan Finn was very late on Liam Burt and fellow Scot Coote, teed up by Breslin, blasted into the net from around 30 yards.

Tempers erupted when a brave Talbot smothered ex-Bohs defender Lopes' drive; the latter and Rob Cornwall both saw yellow arising from the rubble.

Bohs looked pretty comfortable but Finn squared to Lopes who poked home to what was close to silence with 12 minutes left.

It was breathless now and from the next attack Ross Tierney all but split the crossbar in two; a melee ensued and Georgie Kelly seemed to grab Finn by the neck; both saw red, Finn via two yellows.

With three minutes to go, a stunning conclusion to a game that will live happily in the memory. Lyons and Devoy played a delicious one-two and the right-back, who rarely scores with his right foot, found the corner of the net with his deceptively powerful left.

Lyons, one of the brightest prospects in the league, somehow saved enough energy to run all the way across the old ground to the Bohs fans near where the Des Kelly Stand long stood.

Substitutes Dylan Watts and Danny Mandroiu both tested the formidable Talbot in injury time. He stood firm. Bohs would simply not relent.

This place was rocking. Rovers are rocked.