Paris St Germain have rejected an offer from Real Madrid for France superstar Kylian Mbappe saying the offer was "not sufficient".

Spanish and French media reported on Tuesday that Real Madrid had made a €160m bid for the 22-year-old World Cup winner who scored 42 goals in all competitions for PSG last season and has reportedly said he wants to move to Spain.

PSG's sporting director Leonardo told BFM and RMC Sport that the Parisians, who have just signed Argentina forward Lionel Messi from Barcelona, did not plan to discuss the Mbappe matter again with Real Madrid and that if Mbappe wanted to leave he would have to do so on PSG's terms.

"Kylian Mbappe feels like leaving, this seems clear to me... Our goal is to extend and keep him. If a player wants to leave it must be under our terms. This applies not just to Kylian but to all players."

Leonardo would not confirm the figure of €160m but said the bid was "around that".

"We consider the offer as being very far from what Kylian is worth today," he added.

Mbappe joined PSG from AS Monaco in 2017, on loan initially and then permanently a year later in a deal valued at €180m.

Southampton have completed the signing of Torino centre-back Lyanco on a four-year deal.

Having sold towering Denmark international Jannik Vestergaard to Leicester earlier in the month, Saints bolstered their backline by moving for the 24-year-old defender.

Lyanco has represented Brazil up to Under-23 level and joins Southampton from the Serie A side on a deal until 2025.

"It’s a dream that I have had since I started playing football as a child to play in the Premier League and for a team like a Southampton. It’s a dream not only for me but for all my family too.

"I grew up in Brazil and the football is different there, then when I went to Italy I learned that you have to be focused more on tactics. My dream was to play in the Premier League and play strong football, and for me English football is perfect."

Lyanco’s arrival is the latest move in what has been a busy summer for Southampton, who cashed in on Danny Ings and Vestergaard as the pair entered the final year of their respective deals.

Experienced Ryan Bertrand left at the end of his deal, with Saints responding by signing full-backs Romain Perraud, Tino Livramento and Thierry Small.

Fiorentina have announced the signing of Lucas Torreira from Arsenal.

The 25-year-old midfielder has agreed an initial loan switch with the Serie A club holding an option to buy at the end of the season.

Uruguay international Torreira decided on a return to Italy having joined Arsenal from Sampdoria in 2018.
He made 89 appearances for the Gunners and scored four goals.

Aaron Lennon has re-joined Burnley after a spell training with his former club.

The 34-year-old winger was a free agent after departing Turkish side Kayserispor.

The Clarets said on Twitter: "We are delighted to confirm that winger Aaron Lennon has agreed a deal to return to Turf Moor as a Burnley player." 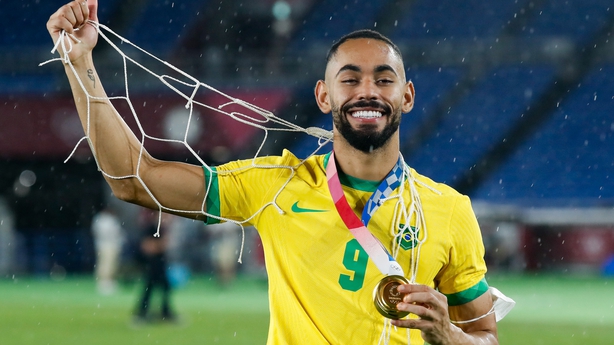 Spanish media reported that Atletico had agreed to pay around €30m for the 22-year-old, who scored seven Bundesliga goals in 25 starts last season.

Cunha was part of the Brazil team that won the gold medal at the Tokyo Olympics, scoring the opening goal in their 2-1 win over Spain after extra time in the final.

The forward is the second major transfer Atletico have made this summer after signing midfielder Rodrigo de Paul from Udinese for a reported €35m.

Cunha joins a highly competitive Atletico front line containing Luis Suarez, who scored 21 goals last season to fire them to the title, and the in-form Angel Correa, who has scored all three of the team's goals so far this campaign in the wins over Celta Vigo and Elche.

Atletico midfielder Saul Niguez is reported to be on his way out of the club.

Newspaper Marca said Atletico were ready to send the 26-year-old Spaniard out on loan to a Premier League side, with Chelsea and Manchester United the main contenders.