Danny Mandroiu will be hoping for a double celebration on Thursday - progression to the UEFA Europa Conference League group stages and a call-up to the Republic of Ireland squad.

The Shamrock Rovers midfielder will be in action that night in the second leg against Flora Tallinn at Tallaght Stadium as they look to claw back a 4-2 first-leg deficit, hours after Stephen Kenny is due to name his Boys in Green squad for 2022 FIFA World Cup qualifiers against Portugal, Azerbaijan and Serbia which will take place in the first week of September.

Mandroiu was called up for the June friendlies against Andorra and Hungary but did not come off the bench to make his senior international debut, with the possibility of stepping onto the pitch in future in the green jersey being something he would regard as a "dream come true".

"Playing for your country is the biggest thing so I'll be honoured if I get picked," he told RTÉ Sport.

"If I don't get picked, I'll work harder. (Kenny) names it Thursday so I'll be watching out.

"It'll probably get announced afternoon time so listen, it'll be an absolute honour to get picked especially for the World Cup games. They're proper, proper games so I'm looking forward to it."

On the club front, he added that he was "very disappointed" not to start for Rovers in the first leg against Flora but is hopeful of forcing his way into the XI for Thursday.

And Mandroiu feels Rovers are "more than capable" of staging a successful comeback mission against the Estonian side, especially with the "reward" of European group stage football - and all that entails - on the line. 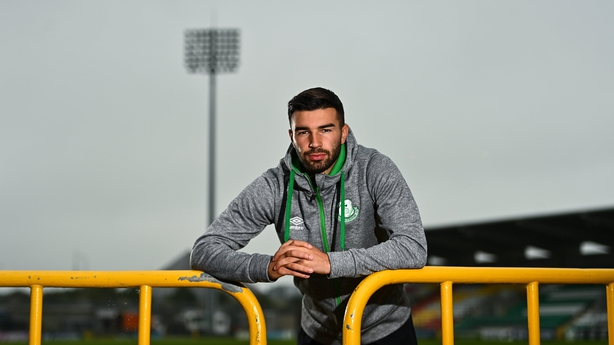 "All to play for here, it's a massive game and really looking forward to it," said the 22-year-old, who also emphasised that the defensive issues from the first leg were uncharacteristic for the team.

"It was just silly mistakes (in the first leg) that we wouldn't normally let happen. So we just need to brush up on them and play the way we played over there on the ball.

"I thought we were good (in possession), so it's a massive game here on Thursday. It's 4-2, we're still in the game and we know we've three and a half thousand fans here on Thursday so we're going to need them behind us and we'll see what happens."

.@ShamrockRovers manager Stephen Bradley is embracing the pressure ahead of the #UECL play-off round second leg against Flora Tallinn, while Danny Mandroiu is excited by the "massive rewards" on offer #RTESoccer @RTE2 @RTEplayer pic.twitter.com/qCVZ6OKDIJ

He added that among the benefits of group stage football, should the Hoops get there, is the attention players would receive from overseas clubs.

"Obviously it puts you in the shop window for teams to come in and look at you against the opposition that we're going to be playing if we get through," said Mandroiu.

"It's not just me, the players in this team are quality. Liam Scales, there's teams coming in for him. We've got top players. I'm sure there'll be loads of teams looking at our players.