Tottenham showed that life might not be too bad if Harry Kane does leave as they put in a rousing display to beat Manchester City 1-0.

The future of Kane has been the major talking point of the summer as he is keen to move on this summer, with City his preferred destination, and his late return to training meant that he was not included in the matchday squad.

It is understood Kane was in the stadium to watch the game and he will have been left in no doubt how the fans, who have shown him complete adulation, feel about the situation following a loud rendition of "are you watching Harry Kane?".

While Kane was late in reporting back for pre-season training his partner in crime Son Heung-min was busy signing a new contract and endeared himself to the Tottenham fans even further by scoring a 55th-minute winner.

The South Korean loves playing against City and it was the seventh time he has scored against them and the fourth in four games in north London. 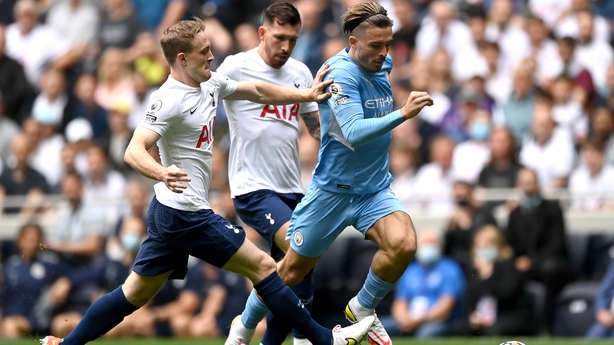 It was a dream start for new boss Nuno Santo Espirito, who has not been dealt the easiest hand given his appointment, and the manner of the performance suggested that Spurs can challenge for the top spot.

City's defence of their Premier League title began with a defeat, but with this game out of the way now they may up their ante in their chase of Kane, which has so far not progressed past an opening bid of £100m.

Pep Guardiola's men will also be glad they have already ticked off their visit to Tottenham's new home, having lost all four visits without scoring a goal.

They were pretty keen to put that right and made an electric start, spurning two very good openings in the first 10 minutes.

Fernandinho had a gaping goal when Hugo Lloris came out to punch Benjamin Mendy's cross and got nowhere near it, but planted his header wide and then defender Joao Cancelo was off target after a loose ball fell to him in an inviting position.

Tottenham looked all at sea in that fast City start, but they have had a settled team in pre-season and they steadily grew into the game.

They were at their most dangerous on the counter-attack as the pace of Son, Steven Bergwijn and Lucas Moura caused problems, but a lack of quality at the final moment prevented them taking real advantage.

Bergwijn had a shot blocked from a quick break and then Son came closest with a bending shot from the edge of the area that took a nick off Cancelo, only for referee Anthony Taylor to award a goal kick.

Eventually that front three came good and sent Spurs in front 10 minutes after the restart.

They were defending a City attack and the ball fell to Moura, whose quick flick released Bergwijn, who carried the ball up the length of the pitch before passing to Son. 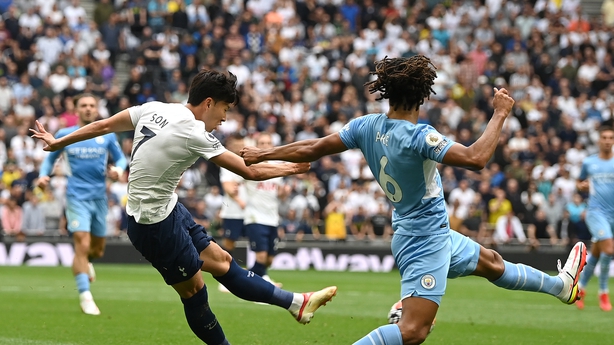 The South Korean cut inside on the edge of the area and sent a low curling effort into the bottom corner. It was a good finish but Ruben Dias got himself into a tangle trying not to handle the shot and missed his clearance.

Spurs should have made it 2-0 moments later but Bergwijn was so wasteful, clipping the side-netting when through on goal after Spurs won possession back again.

City have simply not had the time together on the training pitch to be at their electric best, but they mounted an attempt to get back into the game.

Ferran Torres missed from close range after a well-worked free-kick and the #100million man Grealish shot straight at Lloris after advancing into the area.

Spurs were able to see it out with ease to register a win on a memorable afternoon, but now the battle to keep Kane will surely heat up.