Kepa Arrizabalaga came off the bench to save two penalties and earn Chelsea Super Cup success in a shoot-out victory over Villarreal.

Thomas Tuchel made the call to replace Edouard Mendy in the closing stages of the 1-1 draw – with Kepa then providing the heroics.

Kai Havertz missed the first spot-kick but after that Chelsea were perfect while both Aissa Mandi and Raul Albiol both saw their penalties saved as Chelsea won the shoot-out 6-5.

Hakim Ziyech shone from the start and opened the scoring only to injure his shoulder before half-time to give Thomas Tuchel a worry ahead of the Premier League opener against Crystal Palace on Saturday.

For their large spells of dominance, Chelsea's goal lived a charmed life as Villareal twice hit the woodwork before the prolific Gerard Moreno drew them level.

That was the end of the scoring as the tie was settled on penalties with Tuchel’s decision to bring on Kepa moments before the shoot-out proving to be inspired.

He kept the same starting XI which played in their final pre-season game against Tottenham and the Champions League holders started well.

Just over 300 miles away Romelu Lukaku was touching down at Biggin Hill airport to complete his return to the club and it was Timo Werner, playing in the centre-forward role the Belgian is being recruited to fill, whose controlled volley forced a first save out of Sergio Asenjo.

But Chelsea took the lead in the 27th minute as Ziyech capped a dominant start by turning home a Havertz cross.

Villarreal debutant Boulaye Dia provided the first real test for Mendy as the first half wore on with the Premier League side in charge.

Marcos Alonso had a fine chance to double the lead soon after but his low drive was turned away by Asenjo. 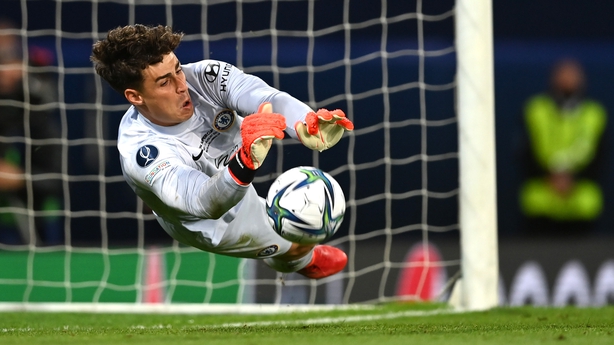 Goalscorer Ziyech was forced off with a shoulder injury just before the interval as Christian Pulisic replaced the Morocco international.

There were bookings for Antonio Rudiger and Tuchel before Alberto Moreno cracked against the crossbar with a vicious volley on the stroke of half-time as Chelsea went in ahead.

Moreno’s effort not only rattled the woodwork but also, too, Chelsea’s confidence as Villarreal came out after the interval on the front foot.

An error from Mendy allowed Gerard through on goal but the Blues goalkeeper recovered superbly to tip the Spain striker’s effort onto the post.

Other minor mistakes went unpunished but Unai Emery would have been pleased with the reaction he saw from his players in a similar vein to their Europa League final comeback.

The equaliser arrived as a scruffy Rudiger pass was pounced on by Villarreal, with Dia squaring for Gerard to turn home.

Chelsea reacted well to being pegged back but could not find a winner in normal time, with the 30 minutes of extra-time proving an attritional affair.

Pulisic missed a half-decent chance while substitute Mason Mount forced a good save out of Asenjo.

The Villarreal goalkeeper then saved the first penalty of the shoot-out as Havertz was kept out.

But Cesar Azpilicueta, Alonso, Mount, Jorginho, Pulisic and Rudiger were all successful, while Mandi and Albiol’s poor efforts were saved by Kepa to win the cup for the Blues.