Jack Grealish made his Manchester City debut from the bench but it was another substitute, Kelechi Iheanacho, who won the Community Shield for Leicester.

Just two days after becoming the most expensive British player following his move from Aston Villa for £100million, Grealish was named among the City substitutes at Wembley.

The England attacker entered the fray with 65 minutes gone but was unable to help City break the deadlock.

Instead it was former City striker Iheanacho who won a second Community Shield for Leicester – 50 years to the day since they won their first – with a penalty two minutes from time sealing a 1-0 victory.

This was supposed to be the first club match played in front of a full house since the pandemic began, but Wembley was only about two thirds full with many fans, especially from Manchester, opting to stay away.

With many established stars also missing through injury or late returns from their summer exertions, and Grealish waiting in the wings, City boss Guardiola named an unfamiliar side and gave teenagers Sam Edozie and Cole Palmer a big chance to impress.

Leicester welcomed back Harvey Barnes from the knee injury which ended his season in February, and he quickly went about unsettling the City defence with his fast, direct running.

But City created the first chance when captain Ilkay Gundogan forced Kasper Schmeichel into a finger-tip save with a curling, dipping free-kick.

Barnes had a low shot tipped wide by stand-in City keeper Zack Steffen before Leicester came even closer to opening the scoring in the 24th minute.

Barnes saw his shot deflect into the path of Jamie Vardy, whose first-time effort hit Steffen at point-blank range and bounced clear. 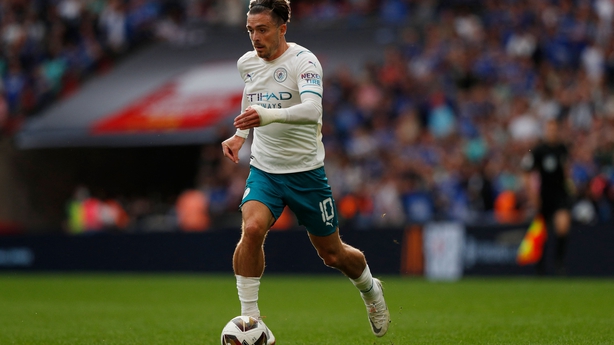 Edozie, the 18-year-old winger who scored three times during pre-season, wasted his big opportunity when he was played in by Gundogan only to shank his shot wide.

With Guardiola getting frustrated on the touchline, Joao Cancelo dragged a shot across goal and Gundogan curled over before Vardy had the chance of the first half in stoppage time.

The former England striker guided a ball across the six-yard box towards goal only for the wrong-footed Steffen to throw out a hand and turn it onto the far post.

After half-time Riyad Mahrez, relentlessly booed by the fans of his former club, lifted a free-kick over and Gundogan drove too high as City began to exert control on proceedings.

They should have taken the lead when Leicester lost possession at a corner and Mahrez ran the length of their half, only to slice wide.

Grealish made his entrance to great acclaim but it was Leicester's skilful left winger Barnes who immediately went close with a curling effort narrowly wide.

Leicester responded by bringing on two of their summer signings, Patson Daka and Boubakary Soumare, with 20 minutes remaining.

Daka, the Zambia striker from RB Salzburg, was denied by Steffen who bravely dived at his feet on the edge of the box.

But Leicester would not be denied and their winner arrived after Nathan Ake clumsily brought down Iheanacho in the area, the striker beating Steffen to send the Leicester fans wild.