Valerien Ismael started his West Brom reign with a hard-fought point after the Baggies twice came from behind to draw 2-2 at Bournemouth in the Sky Bet Championship.

Bournemouth, who introduced new manager Scott Parker to the home fans on the pitch before kick-off, were without sought-after Holland international Arnaut Danjuma while Junior Stanislas was forced to pull out of the squad after suffering an injury in the warm-up.

Bournemouth took the lead in the 12th minute as Marcondes immediately endeared himself to the Cherries faithful.

Billing released Jaidon Anthony down the left and the youngster pulled the cross back for the summer signing from Brentford to fire past Button from 10 yards.

Moments later a long punt over the top of the Baggies defence threatened to release Dominic Solanke but defender O'Shea got back in the nick of time to prod the ball away from the Bournemouth frontman.

The visitors were back on level terms 13 minutes before half-time when O'Shea outjumped the Bournemouth defence to head in Conor Townsend's cross and make it 1-1.

Callum Robinson looked to have put the Baggies in front five minutes later, but his close-range effort was disallowed for a push on home goalkeeper Mark Travers.

Bournemouth had another let-off soon after but Kyle Bartley could not keep his header down from just inside the six-yard box, after the home defence had failed to deal with a corner.

Two minutes before the interval, Travers made a smart save low down to his right to push Robinson's shot behind for a corner.

The hosts restored their advantage seven minutes after the restart. Zimbabwean defender Jordan Zemura made a good break down the left before drilling in a low cross which Button could only claw into the path of Billing.

The Denmark midfielder, who ended last season in good goalscoring form, was not about to pass up the gift and kept his composure to finish into the far corner from 15 yards.

Darnell Furlong came close to equalising when he met Alex Mowatt's teasing free-kick at the near post - but could only glance his header high over the crossbar. 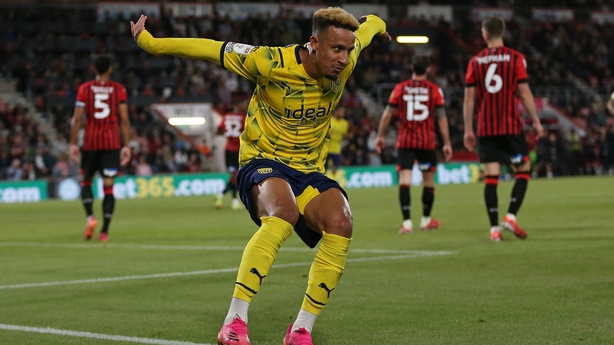 Robinson did get the Baggies back on level terms in the 67th minute, expertly steering the ball into the far corner on the half-volley after sliding in to meet Townsend's cross following a flowing team move.

Wales international David Brooks forced a fine save from Button with a stunning volley from Billing's centre that looked destined for the bottom corner - but the points were shared in Dorset.