Aidomo Emakhu was the toast of Tallaght as the 17-year-old scored a dramatic first goal for Shamrock Rovers in stoppage time to give Stephen Bradley's Hoops no more than they deserved on a night that looked like it was about to end in utter frustration for the League of Ireland champions.

Though they left it late, the win puts Rovers in the driving seat of this Europa Conference League third round qualifier ahead of next week’s second leg in Albania.

In a one-sided encounter, Rovers' goalkeeper Alan Mannus didn’t have a save to make as all the action was at the other end of the pitch.

But as Norwegian referee Kai Erik Steen’s watch ticked passed the 90th minute, Teuta looked like they would go home more than happy with the scoreline and the expectation that they will have more about them in the heat of eastern Europe next week.

Rovers kept playing, though, and finally got their reward in the first minute of the six added on.

The Rovers 10 skipped into the box to pull the ball across for the in-rushing Emahku, who’d replaced Rory Gaffney eight minutes earlier, to gleefully smash it to the roof of the net. 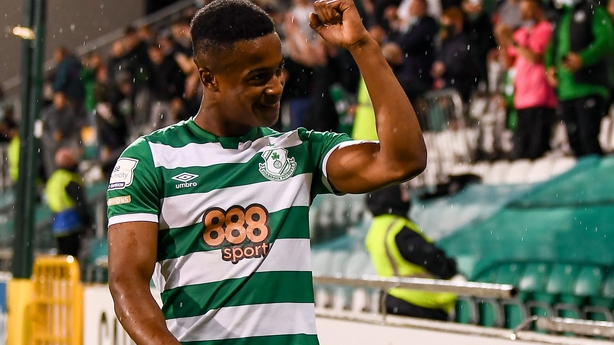 Unchanged from their impressive 3-1 win over St Patrick's Athletic in last Friday’s top of the table Premier Division clash, Rovers owned the ball from the off in what would prove to be a difficult first 45 minutes.

Getting every blue shirt behind the ball from the start, Teuta clearly came to contain the hosts whose first openings stemmed from set-pieces.

Dylan Watts whipped over a second successive corner on 16 minutes which Liam Scales headed over the top.

Three minutes later Watts delivered a diagonal free kick that Grace failed to make a good connection with as his effort bounce past the far post.

For all their possession, it was the 21st minute before Hoops cut through Teuta’s rearguard.

Again Watts was the instigator with a fine ball down the inside left channel for Gaffney.

Showing good feet, the Hoops striker’s pull-back picked out the well positioned Mandroiu who never got hold of his shot which was comfortably gathered by goalkeeper Stivi Frasheri.

Continuing to utterly dominate, patience was the key for Rovers against a side whose 'dark arts’, as Bradley referred to in the build up, was prevalent early on as they time wasted at every opportunity.

Having weathered Rovers’ pressure, Teuta came out to play, carving their first, and only, chance of the game on 40 minutes. 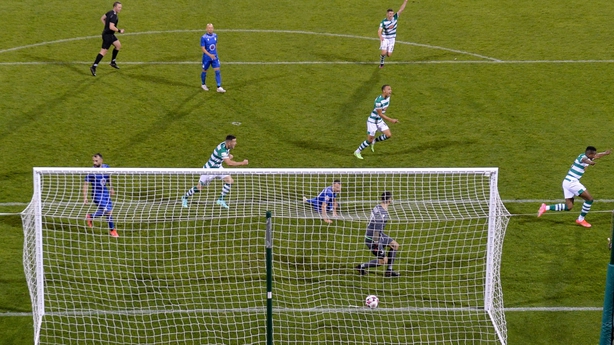 Countering after Rovers lost the ball on halfway, Emilian Vila nodded down Jackson’s deep cross for Tauljant Sulejmanov whose shot on the turn was blocked by Grace.

Rovers finished the half back on the front foot with Mandroiu working Frasheri in stoppage time, but once again his drive from distance was straight at the visiting keeper as Rovers trooped off with some food for thought during the interval.

With more urgency to Rovers’ game from the resumption, Richie Towell won a corner with a deflected drive. Grace then met Watt’s crisp centre from the quadrant with a downward header to bring a smart save on his line from Frasheri.

Calls for a penalty weren’t entertained nine minutes in when the enterprising Watts went down under contact from Hristijan Dragarski after slaloming into the area.

Towell volleyed over while Gary O’Neill had a powerful drive defected out for Rovers’ eighth corner of the game as frustration among the loud 1,300 Hoops fans present mounted. 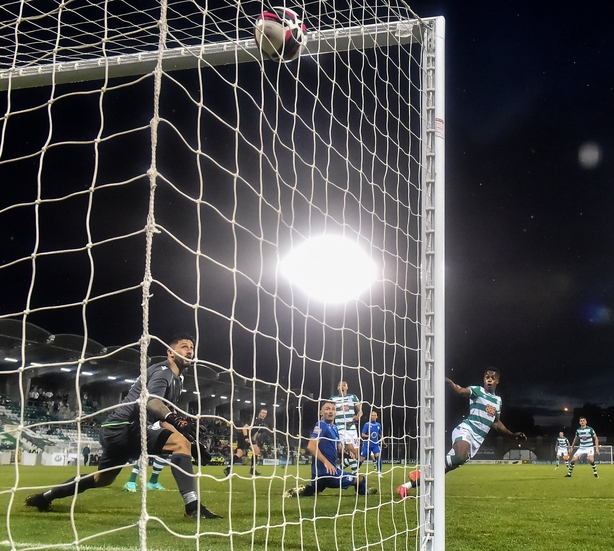 With Kavanagh and Graham Burke introduced, Rovers pressed as the clock wound down, Gaffney flashing a header from a Finn cross wide of the back post before Emakhu provided his fairytale finish at the death.

Should Rovers progress, they will meet the loser of the Omonoia Nicosia-Flora Tallinn Europa League tie in the play-off round of the Conference League with the Cypriot side carrying a 1-0 lead to Estonia for that second leg.