Ange Postecoglou hopes to have reinforcements in this week after another early blow in his Celtic reign.

The Hoops' on-going vulnerability to balls into the box was clear to see as John Souttar’s 89th-minute header earned Hearts a 2-1 victory at Tynecastle, which made it three games without victory for Postecoglou.

With their Champions League campaign finished, Postecoglou appreciates the need for urgent improvement to ensure they are not facing an uphill struggle in the cinch Premiership title race so early in the season.

With a trip to Ibrox coming later this month, Postecoglou is desperate for more signings after introducing two newcomers at Tynecastle.

Carl Starfelt made his debut in central defence 24 hours after his first training session and put in two failed tackles before Gary Mackay-Steven netted an early opener.

Right-back Anthony Ralston levelled in style in the 54th minute but a tactical switch saw Hearts regain the ascendancy and the introduction of another Celtic newcomer, Kyogo Furuhashi, on the day he arrived in Scotland, failed to turn the tide.

Postecoglou knew the challenge ahead when he agreed to take charge in mid-June and just wants to speed up the solutions.

"It's not like everything has just happened in the last week," he said. "It was fairly evident at the end of last year that the club was going to go through a big change. A lot of players had left before I even got the job.

"When I was appointed I knew there was a lot of work to do and I actually saw that as an opportunity because I could bring in the players I want to play the kind of football I want.

"But we just haven't been able to do that as quickly as I'd hoped we would. That's no-one's fault, everyone is trying hard to get the deals done, it's just a difficult market at the moment.

"That's just delaying the process of me being able to bed down the principles I want.

"I'm hopeful over the next week that we bring in at least another couple. We need players and we are working hard to get them in."

Liel Abada might also have had a goal only for the whistle to blow just as he stroked home Greg Taylor's cross following a harsh offside decision.

There was a stark reminder of poor decisions made a long time before Postecoglou's arrival when goalkeeper Craig Gordon made two stoppage-time saves from James Forrest and Starfelt, which Hearts boss Robbie Neilson described as "world class".

Gordon, who conceded his first goal in 12 club games, was allowed to leave Celtic last summer while the club spent millions of pounds on Vasilis Barkas, who sat on the bench while Scott Bain was caught in no man's land for the winner. 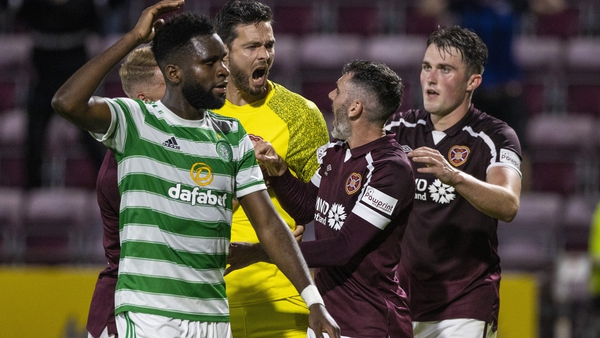