Stephen Bradley saw his Shamrock Rovers side move clear at the top of the Premier Division with a 3-1 win over St Patrick's Athletic last night but reckoned they could have secured an even bigger victory.

John Mountney’s goal on half-time cancelled out Danny Mandroiu’s opener but a Roberto Lopes header and another Mandroiu strike secured the points for the hosts at Tallaght Stadium.

The result saw Rovers move three points clear of Pat's with a game in hand.

"We knew they'd press us high and we had to take that energy out of them by moving it around and taking the energy off them," said Bradley.

"We did that really well for the first 25 minutes. It might not have looked like there was a lot going on in the game but for us it was exactly what we wanted.

"We knew as the game went on that space would open up and we could hurt them.

"When you play a team like Pat's, they want to have a go at you. [The equaliser] was really disappointing.

"The game should have been over at half-time and they scored right at the final moment of the half. In the second half, we scored two goals but it could have been five." 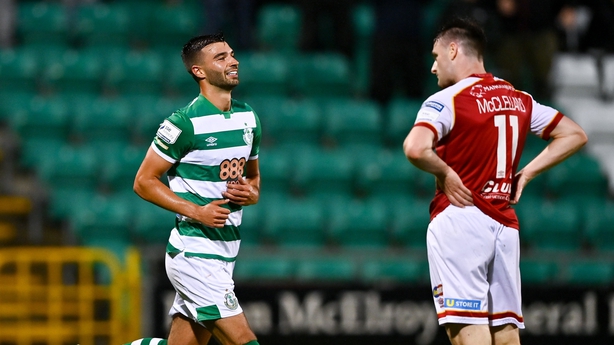 Midfielder Dylan Watts laid on all three goals and impressed the manager in difficult conditions in Dublin.

"Dylan was fantastic," he said. "He was the best player on the pitch by a mile.

"He has shown tremendous maturity in his play and how he has gone about his business. When he is in that form he makes us a better team.

The league leaders face Albania's Teuta on Thursday in the Europa Conference League.

"It's exactly what you expect from a team from that part of the world. They know the dark arts as well so it's going to be a difficult game."

Saints’ first-team manager Alan Mathews admitted his side were beaten by the better team.

"Our quality tonight wasn’t as good as it has been in the last couple of weeks," he said. "Rovers took advantage in the key moments.

"They are a very good side, we are trying to get up to that level on a consistent basis.

"We contributed to our own [downfall] by being a little bit expansive and they punished us."

Rovers' next league game is at home to Longford on Sunday week, while Pat's are away to Dundalk on the same day.