Irish teams have not been televised this year in European competition.

Dundalk's game will be on LOI TV, while a streaming option has not been announced for Bohs as of yet.

Both games will be played in similar conditions with temperatures in Dudelange around 24 degrees for kick-off and slightly cooler at the later kick-off in Dublin.

Dundalk played in sweltering conditions last Sunday against Finn Harps, while a much-changed Bohs side had a similar scenario against Longford.

HOW DID THEY GET HERE?

Both sides cruised through their first round matches, with Dundalk winning by five goals over Newtown of Wales and Bohs crushing Stjarnan of Iceland 3-0 at the Aviva Stadium. 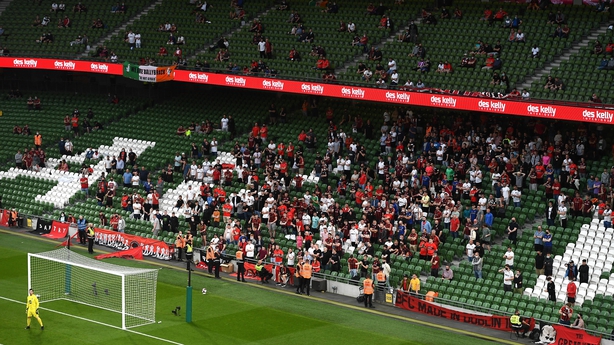 The Lilywhites still treated the second leg in Wales seriously despite their four-goal advantage and Michael Duffy sealed the win to boost the league's co-effecient.

The benefit of the Conference League was clear as the Irish sides earned €550,000 by reaching this stage and both will feel they have a chance of progressing further.

THE LUCK OF THE SEEDED DRAW

As always, it plays a big factor. It certainly benefited Dundalk as Newtown were one of the weaker teams in the competition.

Dundalk were the only Irish side seeded this year. Levadia Tallinn is an undoubted step up as the leading team in Estonia.

The league is not of the highest quality but 14 wins from 17 games and just one defeat is a warning sign of the threat to Dundalk.

Levadia had a 3-1 win over St Joseph's from Gibraltar and conceded first in the away leg to bring life into the tie.

Former Georgia international Zakaria Beglarishvili scored to settle the nerves but it did provide a scare at least. He is the top scorer in the league with 14 goals.

With several Estonian internationals and their stunning form, it will be a difficult night. Recent history would support the Lilywhites. Indeed the sides met in 2018 when Dundalk won 3-1 won aggregate and Cork City also enjoyed a win over them.

Levadia’s record in Europe is poor so it’s a big opportunity to move on to a round-three tie with Vitesse Arnhem. They would also pocket an additional €300,000.

Tallaght is the venue which has been a regular home away from home for Dundalk in European football. One thousand fans are permitted to attend.

There is no doubt Dudelange are Luxembourg’s kingpins. With 14 league titles in two decades, they have dominated the football scene in the small country.

Luxembourg’s win over Ireland was a reminder of where we stand in the echelons of the game.

Dudelange have twice qualified for the group stage of the Europa League in recent seasons.

They just missed out on the league title last season as Fola Esch won it on the final day. The new season does not begin until next month which is one advantage for Bohs.

If there is one positive sign for Bohs, Fola Esch disappointed against Lincoln Red of Gibraltar, losing 5-0 in a second leg Champions League tie.

After a shortened 2010-2020 season, Dudelange missed out on Europe last year so they return to this stage with their great record, if with some doubt over if they can repeat those efforts.

Their most recent tie with an Irish side was with UCD, a tie that ended in a famous win for College in 2015/2016.

Adel Bettaieb is the player to watch. He bagged 17 of the 70 goals scored last season.

CAN THEY DO IT?

Yes is the answer in both ties. Dundalk and Bohs showed their nous and craft when Sligo Rovers couldn’t last Thursday.

The youthful Bohs side and experienced Dundalk can rise to any occasion. Both will be happy to go to away legs with a fighting chance and fancy their chances from there.