Former referees boss Keith Hackett has backed calls for the Premier League to follow UEFA's decision at Euro 2020 and minimise the use of the video assistant referee.

Refereeing at the tournament has won widespread praise after UEFA’s more measured approach to VAR intervention has allowed games to flow.

Premier League clubs are understood to have urged Professional Game Match Officials Limited (PGMOL) to adopt a similar policy in the Premier League next season and Hackett agrees.

Former PGMOL general manager Hackett told the PA news agency: "In terms of VAR, it has been a very light touch. UEFA operated to the criteria and that is when they consider the referee has made a clear and obvious error.

"They have stuck to that criteria and there hasn’t been the outcry. As a result, what we saw at the Euros was some really good refereeing and their contribution benefitted the game as a whole." 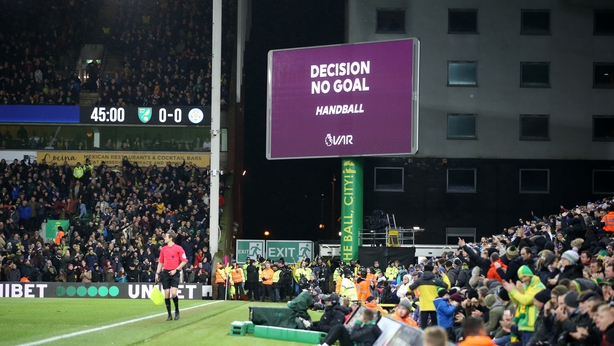 Hackett, one of the English top-flight’s leading referees for over 20 years until 1994, believes the Premier League has relied far too heavily on VAR.

"What we’ve seen in the Premier League is referees abdicating their responsibility and they’ve taken a lazy approach to refereeing," he said.

"At Euro 2020 there were dedicated VAR officials. They weren’t refereeing a match one day and then working as a VAR official the next.

"The VARS were based at Nyon and they were under instruction to apply the light touch, but their interference, when that occurred, was examined, monitored and assessed.

"It’s a question of accountability. The referees and VAR officials at this championship knew that if they didn’t do well they would be on a plane home."

Hackett has for several years been an outspoken critic of current PGMOL general manager Mike Riley and Premier League clubs now want a rethink over persistent VAR intervention next season.

"We've seen (English referees) Anthony Taylor and Michael Oliver, very clearly, given the guidance and leadership that was offered by UEFA’s refereeing committee, both do a terrific job at the Euros," Hackett added.

"They are outstanding referees and in the Premier League they’ve been operating with one hand tied behind their back.

"You use the sciences to improve officiating, but at the end of the day it’s down to the personality of that individual referee in how he or she deals with players.

"Is that being coached out of our current referees? At Premier League and Football League level we’re creating clones and not individuals capable of making decisions."