Vladimír Weiss ended Shamrock Rovers' Champions League aspirations with a controversial winner at Tallaght Stadium on a night that, for a fleeting spell, promised so much for Stephen Bradley’s valiant Hoops.

Graham Burke’s early penalty and a stunning strike from Richie Towell midway through the second half had Rovers deservedly level on aggregate after last week's 2-0 loss in the Slovak capital.

Having failed to beat Alan Mannus from a late penalty in that first leg in Bratislava that would have surely put the tie to bed, Slovak international Weiss stepped up with a goal to seal Slovan’s passage through to next week’s second round meeting with Young Boys of Switzerland.

The losers of this tie having already been granted a bye, Rovers now drop into the third qualifying round of the Europa Conference League, the draw for which is next Monday.

Rovers’ head coach Stephen Bradley made three changes from last week with the experienced Joey O’Brien replacing Sean Hoare on the right side of their three-man defence.

Danny Mandroiu came back into an attacking midfield role alongside Towell while Burke returned in a two-pronged attack with Rory Gaffney.

Slovan manager Vladimír Weiss made two changes from with his namesake son in from the start among four full internationals boasting close to 300 caps between them.

The signs were encouraging from the get go for Rovers, skipper Ronan Finn winning a free kick inside the opening minute which Mandroiu overcooked allowing Adrian Chovan to comfortably gather.

The danger from Slovan soon materialised twice within a minute through Ezekiel Henty. The Nigerian striker’s first effort was straight at Mannus while he should have done better than shoot tamely wide after racing in on goal following a Roberto Lopes miss-kick way up field.

Hoops' pressing game soon brought its reward of the early goal they craved to get them right back into the tie on 16 minutes.

A sublime through ball from Mandroiu found the run of Burke who was clumsily tripped by Slovan’s Bulgarian captain Vasil Bozhikov to concede a penalty. 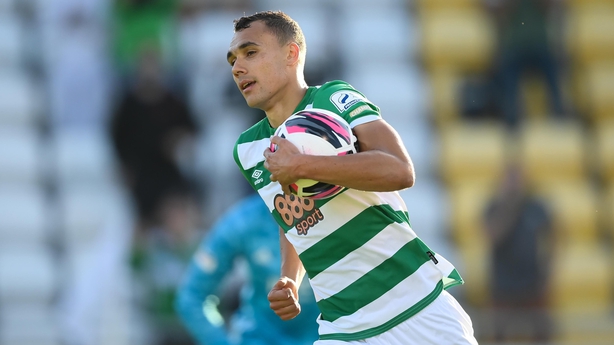 The calmest man in Dublin 24, Burke got to his feet to emphatically drive home the spot kick, sending Chovan the wrong way.

The game’s frenetic pace continued and but for the brilliance of Mannus, Rovers’ hero from last week with that late penalty save, Slovan would have been level within three minutes.

The 39-year-old Northern Ireland goalkeeper first somehow kept out a thumping drive from Dutch midfielder Joeri de Kamps, with Mannus was there again with a terrific parry save from David Hrncár’s follow-up header.

Rovers lived dangerously at the back as half-time approached, coughing up chances for Henty, whose shot was deflected for a corner while Rafael Ratão, who scored both goals in the first leg, headed wide.

Though Slovan started the second half on the front foot, Rovers brought the 1,500 in attendance to their feet in the 58th minute. Liam Scales treaded a ball across the edge of the visitors’ area for Burke to set up Finn. Chovan needed both hands behind the powerful shot to parry it away.

But Chovan was helpless on 64 minutes as Rovers levelled the tie with a brilliant second goal. 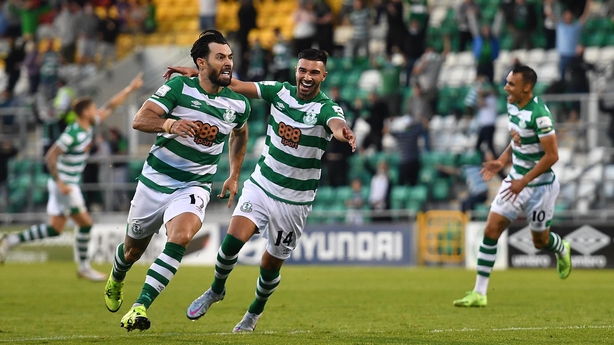 Gaffney’s tenacity on the right worked the opening as he then picked out Towell with a wonderful square pass.

Taking a touch, Towell found the top corner with a cracking right-foot strike for a memorable first goal for the club.

Slovan upped their game with Vernon De Marco drilling narrowly wide before they got their winning goal on 73 minutes, leaving Rovers incensed.

A livid Lopes certainly appeared to have been fouled in the build up, but no whistle was forthcoming. Weiss got possession in the area to score with a low drive past Mannus into the far corner.

Lopes was close to regaining parity when meeting Mandroiu's corner but for Chovan making his most telling spot of the night with a fingertip save.

Rovers strived till the death. Substitute Aaron Greene had a header deflected for a corner with Scales also seeing a header over the crossbar as Slovan held out for victory. 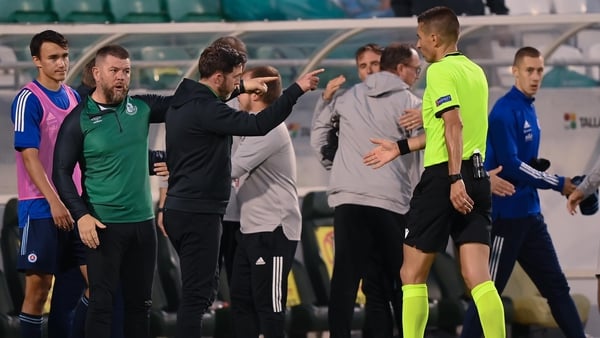 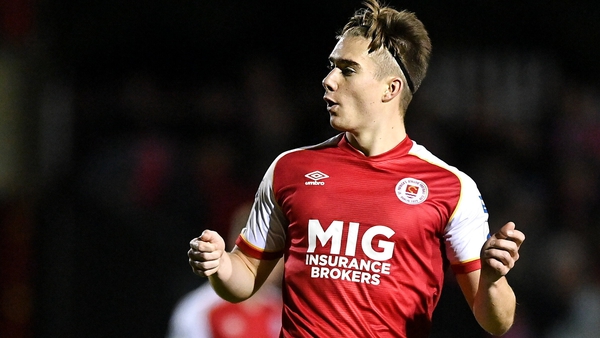