Shelbourne looked on course to maintain their 11-point cushion at the summit of the Airtricity League First Division thanks to a moment of magic from Michael O'Connor but Treaty United substitute Willie Armshaw’s injury-time equaliser ensured a dramatic share of the spoils at the Markets Field.

The Shels striker’s touch and finish was the moment of quality that it was going to take to penetrate a dogged Treaty United who otherwise maintained their shape quite well throughout but just as it seemed the Reds would leave with a deserved three points, the Limerick side snatched a draw with the last kick of the game.

Shels’ consistency in their XI had been key to an eight-game winning run - a run that started immediately after they were pegged back by Treaty in Tolka Park thanks to a late Clyde O’Connell equaliser.

Ian Morris sent out the same side for the third game in a row, looking to extend the gap between his Reds and their nearest challengers pre-kickoff.

That 2-2 draw played out in these sides’ first meeting was all-action, but this sequel really lacked spark early on. 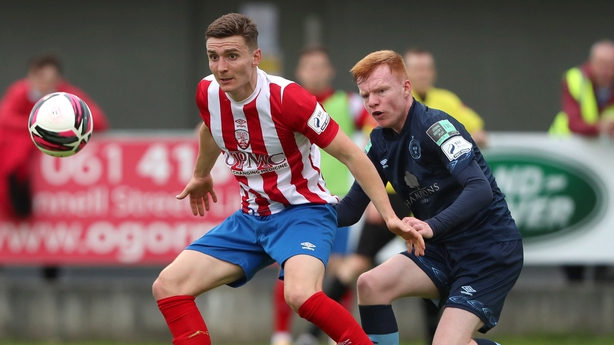 Happy to defend deep, the Limerick side’s best player through the first half of the year Anto O’Donnell marshalled a unit that really offered no space in central areas, and with neither John Ross Wilson nor Kevin O’Connor getting the space to overlap that they’d like, Ryan Brennan too often dropped deep to start play out of necessity.

Shels had the two best chances of the first half – one from an uncharacteristic misjudgement at the back as a jump on a defensive header was mistimed - leaving Michael O’Connor running at Callum McNamara with JJ Lunney for company.

The youngster played the situation brilliantly, forcing the pass from O’Connor to arrive late with Tadhg Ryan getting out quickly to narrow the angle.

The intensity kicked up a gear in the second half – first through Ryan Brennan curling just wide, then Charlie Fleming clearing off the line – and finally courtesy of the breakthrough in the 68th minute.

As the warning signs weren’t heeded, a ball in from the right flank caught Treaty unawares and Mikey O’Connor showed his class.

The touch on his chest was measured; the ball falling perfectly to his right boot, before he slammed it into the far corner out of the reach of Tadhg Ryan.

Shels probably deserved the win, but as usual, the newcomers to the league failed to read the script. After a Marc Ludden corner was recycled, the ball came to substitute Willie Armshaw outside the box who rocketed his effort into the top corner, giving Brendan Clarke no chance with the last kick of the game. 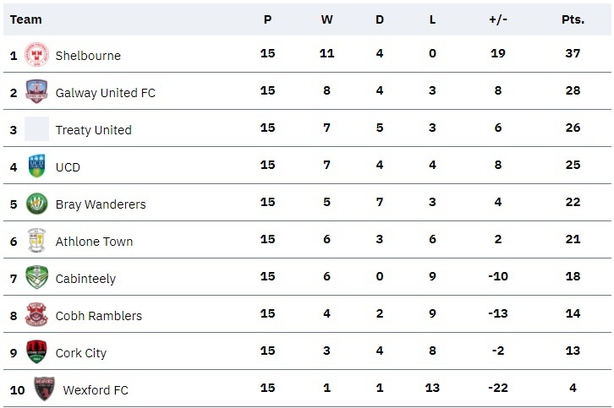 Elsewhere Bray Wanderers also left it late as they salvaged a dramatic 2-2 draw at Cork City.

Cian Murphy put the Leesiders ahead at Turner's Cross after just four minutes an that's how it stayed until half-time, though the hosts spurned chances to extend their lead.

It looked like they'd sewn up the points when Murphy struck again on 55 minutes but Darren Craven's 83rd-minute effort gave Bray hope, and four minutes into injury-time Andrew Quinn nicked an unlikely point for the visitors.

There was even more late, late drama over at UCD. The Students fell behind against Wexford when Jack Moylan netted on nine minutes but Colm Whelan's 25th-minute penalty levelled things up.

That's how it looked like it would stay until Evan Caffrey won it for UCD in the 92nd minute.

Derek Daly's 19th-minute strike was enough to swing it Athlone Town's way in their clash away to Cabinteely, while a goal on each half from Ruairi Keating and Wilson Waweru saw Galway United get past Cobh Ramblers 2-0.