Finn Harps will play in front of their own supporters for the first time this season when they welcome Waterford to Finn Park tonight.

In line with government guidance, 200 supporters will be on hand as eighth place Harps welcome the side one place below them.

A 3-1 defeat to Drogheda last time out meant that Harps are six games without a win, their last victory coming against Waterford back in May.

Waterford come into the game on the back of 2-0 defeat to Derry City, bringing an end to a mini revival of form which saw them takes seven points from their previous four games.

However form is very much with Harps in this fixture, having come out victorious in each of the last seven meetings between the sides.

Finn Harps: Kosovar Sadiki will miss the game through suspension. Mark Coyle is once again available after serving his one match ban last week. Karl O'Sullivan, Johnny Dunleavy and Ryan Connolly are doubts.

Waterford: New signings Max Hutchinson and George Forrest are both be in the reckoning for Waterford after making their debuts in the defeat to Derry.

Ollie Horgan (Finn Harps manager): "We'll need to be at ourselves to have any chance of getting a result on Friday night. We were behind in Waterford for 70 odd minutes before we managed to get back into the game and we can't afford to go behind so early again.

"It'll be very tight.. we needed a goal with the last kick of the game the last time we played them at Finn Park and that could well be the case tomorrow.

"We're down a few bodies through injury, suspension and with a few lads moving on but that's no excuse. The reality is we need to improve starting Friday night or we'll be right back in a dogfight at the wrong end of the table." 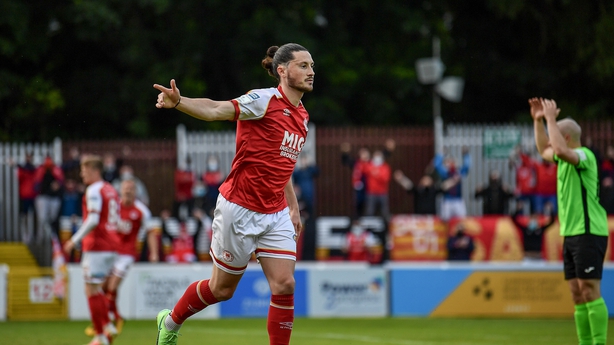 St Patrick’s Athletic will welcome 500 fans for their clash with Derry City at Richmond Park.

The Saints dropped back to third place after a 3-1 defeat at the hands of Bohemians on Friday last, where they finished with nine men after Lee Desmond and Ian Bermingham were sent-off.

The hosts will have the chance to close the gap on Shamrock Rovers and Sligo Rovers with the top two in European action.

The two sides met at the Brandywell just after Ruaidhrí Higgins took the reins at his hometown club and served up a entertaining 2-2 draw, while the Saints came out on top in their previous meeting at Richmond this season, winning 2-0.

St Patrick’s Athletic: Lee Desmond and Ian Bermingham are both suspended as their respective red cards last weekend, Shane Griffin is recovering well from his shoulder injury but will miss the game.

Derry City: A long-term injury to Marc Walsh means that the winger won't be available anytime soon, while Jamie McGonigle picked up a knock in training this week and is rated doubtful.

Joe Thomson was given leave to return to Scotland following the birth of his son this week and the midfielder won't be back on Foyleside until after the match.

Stephen O’Donnell (St Patrick’s Ath): "I felt when we played Derry the last time in Richmond, they had a real good character amongst the team, they worked hard with that sending off early on and it took us a while to break them down and they never gave up. Ruadhri (Higgins) had good decent players and it looked to me like a good group of players to work with when he came in.

"Obviously they have strengthened in the last week or so since the window has opened, so they are not resting on their laurels and they obviously see it as an opportunity to do something between now and the end of the season with the acquisitions they have made so it's going to be a really tough game."

Ruaidhrí Higgins: (Derry City): "It's a difficult place to go at the best of times but they’re also playing really well at the minute. I honestly believe they are genuine title contenders this season."

"We’ve been doing OK ourselves as well of course and the new faces we’ve brought in recently have re-energised the group. We’ve prepared properly for the game and we’ll do what we always do and go and try to win it."