Captain Harry Kane insists England that his side's semi-final victory over Denmark will count for nothing if they don't beat Italy at the weekend, after they reached the Euro 2020 final.

The skipper scored an extra-time winner - following up after Kasper Schmeichel saved his penalty - to beat Denmark 2-1 and set up a showdown with Italy at Wembley on Sunday.

England had to come from behind after Mikkel Damsgaard's free-kick opener was cancelled out by Simon Kjaer's own goal.

Kane knows the job is not done yet however and said: "It's going to be an amazing occasion and I'm extremely proud leading the boys out in any game, no matter making history and getting to our first final.

"As the game gets closer I'm sure the excitement and nerves will kick in. It will be a special day but there will be a winner and a loser and we have to make sure we are on that winning side.

"We want it to be a special day for everyone. It's hard to take it all in at the moment but I'm sure we will all enjoy it.

"It's really sometimes hard to take it all in. Sometimes, like nights like tonight, you've just got to be there with the fans and sing with the fans. We know we haven't won nothing yet but we have to enjoy nights like these.

"Of course there's always that feeling in the back of your mind that you've got one more to go, so we don't want to get too carried away. But I'm obviously extremely proud to be the captain of this side." 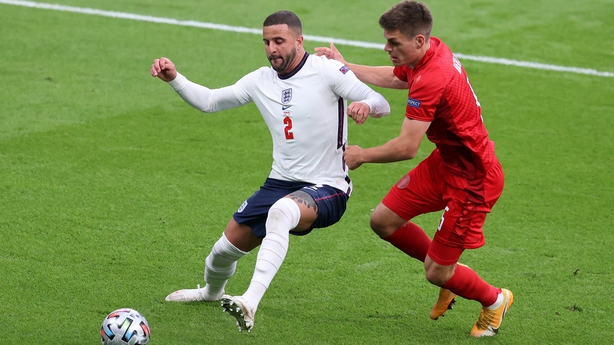 Kane gobbled up the rebound after his 104th-minute penalty - awarded after Raheem Sterling went down very softly under Joakim Maehle's challenge - was saved by Schmeichel to bag his fourth goal of the tournament and he admitted it was a poor spot-kick.

He said: "As a penalty taker, like I've said before, sometimes the keeper dives the right way and, to be fair, the penalty wasn't executed as good as I've obviously done in the past.

"I was fortunate to see it bounce back but, look, that's football. Sometimes, I've said all along, as a striker it falls your way and thankfully it did."

England conceded for the first time in the tournament after Damsgaard's 30th-minute free-kick.

But they were behind for just nine minutes when Kjaer turned Bukayo Saka's cross into his own net and Kane believes Gareth Southgate's side showed their grit.

He said: "What a fantastic tournament it's been so far. It was a different type of win, we had to dig deep against a very good Denmark side.

"We got the job done so of course what an opportunity, being at Wembley for the final.

"It's our first European Championship (final) as a nation so we'll enjoy this one but of course the focus turns straight on to Sunday. We'll recover well and try and prepare for that."