It may have taken 12 games but Cork City finally moved their first win of the 2021 season - and it lifted them off from the bottom of the table as a result.

Paul Farrell is calling the shots since Ronan Collins stepped down as manager and his task is not an easy one. Yet he has been getting a response from his players and this display proved that.

The winning goal came from captain Becky Cassin, who has been outstanding all season, as Bohs were caught sleeping at the back post during a corner kick.

This was a game to forget for Bohs, who need to rediscover their rhythm quite quickly but next up is a trip to champions Peamount United.

A goal in each half helped DLR Waves collect the three points in this encounter that didn't really set pulses racing.

Leah Hayes-Cohen made her debut between the posts for Galway and she was relatively assured for the majority of the game, but was caught off-guard when Shauna Fox struck the ball and it somehow ended up in the back of the net.

Katie Malone will feel that she deserves the plaudits for that opening goal, but there was no doubting that she got her team's second goal when providing a crisp finish inside the penalty area.

This was a first home defeat for Galway boss Stephen Lally and he will be disappointed with aspects of the performance, but with Julie-Ann Russell and Becky Walsh now available they will look to improve moving forward. 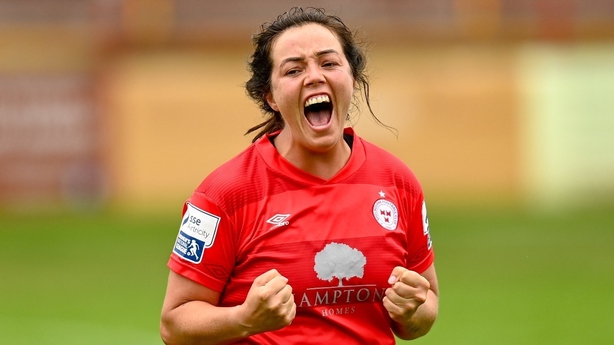 This Dublin Derby rarely disappoints in terms of drama, but this game may go down as one of the best yet in the history of this League.

Saoirse Noonan got things started with an early header to give The Reds control. And she doubled the lead soon after with a fine strike from distance.

Peamount pulled one back through a converted Eleanor Ryan-Doyle penalty before Emily Whelan put Shels back in the groove with a wonderful goal.

Áine O'Gorman and Ryan-Doyle both scored to level matters as the tension was cranked up to 11, but Noelle Murray had the final say with a cool finish in added time.

Seconds were ticking down when Aoibheann Clancy got the vital touch to secure back-to-back victories for Wexford boss Stephen Quinn.

Having stepped up from assistant manager to fill the void left by Tom Elmes - who begins his tenure as Republic of Ireland Women's Under-16 Head Coach next week against England - Quinn has not changed much, nor has he needed to.

In this game, there was frustration amongst the Wexford players as they struggled to break down a hard-working Treaty United side until Sinead Taylor broke the deadlock on 68 minutes.

Treaty hit back through Gillian Keenan and looked to be on their way to earning a draw before Clancy guided Wexford onto 24 points with a late goal.