Gareth Southgate believes going on the road will help rather than hinder as England look to take another step towards reaching their Everest in Saturday's Euro 2020 quarter-final against Ukraine in Rome.

Having topped Group D unbeaten, the Three Lions secured a mammoth last-16 result against old foes Germany on Tuesday as Raheem Sterling and Harry Kane secured a 2-0 win at a rocking Wembley.

That triumph has seen hope and expectation increase that this could finally be the year that England add to the World Cup triumph of 1966, when Sir Alf Ramsey's side played all six of their games at the national stadium.

Southgate's men would play all but one of their matches at Wembley if they reached the Euro 2020 final, with Saturday's quarter-final against Ukraine at the Stadio Olimpico the only game they would play away from home.

Logistical headaches and hot weather replace home comforts and a partisan crowd, but the England boss believes that could provide the kind of shock they need after the Germany triumph.

"I think there was clearly a big emotional toll from the game and everybody enjoyed the day but, even in the dressing room afterwards, the players were already talking about the next game and the need to prepare well," Southgate said.

"So we have shifted the mindset quickly on to that next challenge.

"We've achieved one challenge but that's not the Everest we set ourselves, really. We want to push on from where we've got to now.

"I think the psychological freshness is key. We've obviously got a strong squad as well.

"It's actually, for us, probably a good thing to be going away now. It would've been very hard, three days later, to replicate that experience at Wembley.

"So now we've got a different sort of test.

England are overriding favourites with bookmakers to progress to the semi-finals, three years on from reaching the final four at the World Cup.

Underdogs Ukraine are 24th in the FIFA world rankings - 20 spots below the Three Lions - and were the last of the third-placed sides to progress to the last 16.

Andriy Shevchenko's men beat 10-man Sweden 2-1 in extra-time on Tuesday and are in just their second major tournament quarter-final, with Southgate wary of their threat.

"I think we know that Ukraine are a good side," he told UEFA. "I've been really impressed with what Andriy's done with them.

"They had a couple of sticky results through the autumn, through the Nations League but they've bounced back, and they got a very good result in France, in the World Cup qualifiers and, again, this week against Sweden.

"So if we give them space to play, they'll play, and they've got some dangerous forwards." 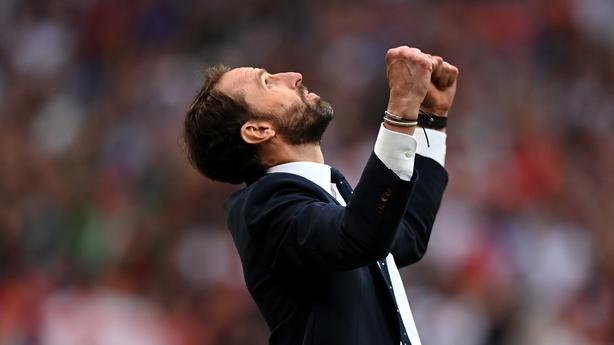 Ukraine will be even more concerned about England's attacking options, although one of them appears to be a doubt for Saturday.

"We've just got to check on Bukayo (Saka), who had a slight knock today," he said. "But other than that everybody is available, yeah."

Southgate has enviable strength in depth in that area and throughout, but baulked at the idea of resting his four booked players for fear of them being suspended for the semi-final.

But rotation and a return to a four-man defence could benefit England in Rome, where it is forecast to be 27 degrees Celsius at kick-off.

"We had six days prep before the last game," Southgate said. "Although the game the other day was intense and emotional, it was only 90 minutes so I think everybody's fine in terms of physical load.

"We've of course got a strong squad and a strong bench as well and the heat here - although we won't be right in the middle of it - is going to have a little bit of an effect by the end of the game, I would think.

"We've just got to manage people through that but the players are all physically in a good position."