Shelbourne moved 11 points clear at the top of the First Division table as they edged past Cork City 2-1 at Tolka Park on Friday evening.

The Leesiders started strongly in Dublin but it was Shels who broke the deadlock on 36 minutes when Michael O'Connor headed home Georgie Poynton’s free-kick.

After the break the hosts hit the woodwork twice in a frantic few minutes before Cian Murphy equalised with a sharp 49th-minute strike.

Cork pushed hard for a point but they couldn't breach a stubborn Shels rearguard as the Reds' march towards promotion continued.

Elsewhere Athlone Town and Bray Wanderers played out a goalless draw. Ryan Graydon saw red for the Seagulls in the 35th minute but they dug their heels in to take home a point.

UCD came away from Cabinteely with the three points. Colm Whelan broke the deadlock on 57 minutes with Liam Kerrigan doubling the Students' advantage a minute from time. Eoin McPhillips did get a late, late consolation back for Cabo but UCD saw it out to go second.

Treaty United slipped to a 1-0 loss against Galway United. Padraic Cunningham's goal three minutes into the second half settled a tight contest, with UCD, Treaty and Galway all now on 22 points and only separated by goal difference. 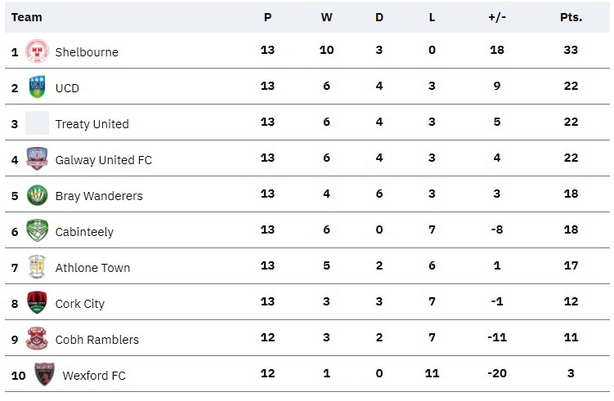