Kieran Tierney took his hat off to classy Croatia as his admitted Luka Modric and co were too good for Scotland.

Steve Clarke's side had to beat the 2018 World Cup finalists if they were to reach the last 16.

But it is Zlatko Dalic's team who will march on to face the runner-up in Group E after Modric scored a sublime second before swinging in the corner from which Ivan Perisic netted to slam the door shut on the Tartan Army's dream of qualification.

Arsenal ace Tierney said: "The Modric goal knocked the stuffing out of us because we knew we were going to have to score two.

"And we knew the way the game was going it was going to be hard because they were unbelievable.

"Modric, especially, I think his performance was incredible. And as a team Croatia were magnificent.

"It was just tough to play against.

"Callum's goal gave us every chance. It was a tough first half but it was the perfect time to score and give us more confidence going into the second half. But, it never turned out to be that special night.

Tierney was forced to sit out last week's group opener against the Czech Republic and without him, Clarke's side got off to a nightmare start with a 2-0 defeat.

A battling draw at Wembley kept the Scots clinging on but defeat to Croatia meant yet another early exit for the long-suffering Tartan Army.

However, the fans paid tribute to the players' efforts with a standing ovation at the final whistle. 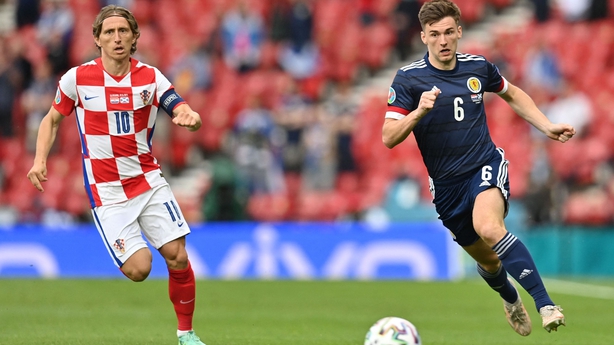 Asked if Clarke's side had under-performed, former Celtic full-back Tierney said: "It's hard to say. I think we'd have liked to get off to a better start and it was an uphill battle from that game.

"But we can hold our heads up high with the effort and the commitment.

"We played against three amazing teams who have been in tournament football a lot more than us and have a lot more experience of games like tonight's. I think that showed.

"But (the scenes at the end) shows we were all in it together tonight, throughout the tournament. The support has been fantastic, we're all very grateful for that.

"We did our best to make the fans proud. But it wasn't to be.

"Is this the start of something rather than the end? That's the aim. That's what the manager said and that's the message he wanted to get across - that it's not the end for this group of boys and this squad.

"It's just the beginning of us qualifying for tournaments more and more and giving the fans more to celebrate and cheer for and I'm sure the boys will give absolutely everything to make the fans and the manager proud in the future.

"We will learn, for sure. Tonight was a big learning curve for us all. Croatia had been there before, plenty of times, and with the quality they've got it showed tonight and we just have to learn from stuff like that because the way they played made it hard for us to get going."