Raheem Sterling believes England must go into the Euro 2020 knockout phase with no fear after beating the Czech Republic.

The Manchester City forward scored his second goal of the tournament to earn a 1-0 win at Wembley as England topped Group D.

The Three Lions will face the runners-up from Group F in the last 16, likely to be France, Germany or Portugal, and Sterling remains positive.

"At some point you are going to have to face the best teams, that's the whole point of being in the tournament, which is to challenge yourself," he said.

"Our objective from the beginning was to win the group. It’s tournament football and things are going to be difficult at times but we need to keep doing what we’re doing as a team which is being solid and taking our chances when we can."

Sterling also defended England’s pragmatic approach in the group with the Three Lions yet to concede.

"If you don’t concede goals you win football matches and we’ve been doing that really well," he said.

"People are disappointed with the Scotland game a couple of days ago, we didn’t score but we didn’t concede and that’s the most important thing." 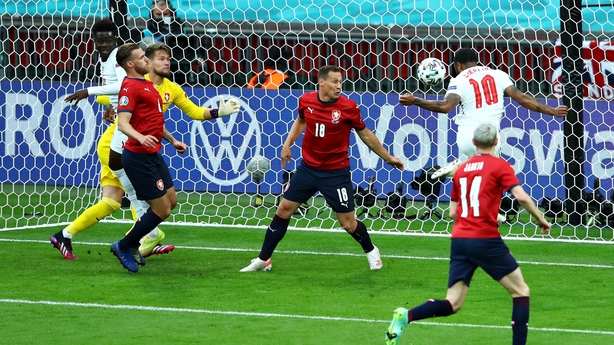 Sterling also praised Jack Grealish – who set up his 12th-minute winner – and Bukayo Saka after they made their first starts of the tournament.

"They got into the pockets really well, they were positive and it’s brilliant to have these players around you who can create goals," he said.

"It’s part of tournament football, there are different players needed for different matches. They are massive for what we need to do."

England’s last-16 tie will be at Wembley next Tuesday and Saka believes home advantage will be key, whoever they play.

"It’s important for us to be here at Wembley, we have played here a lot and won a lot," he added.

"We have a lot of confidence playing in the stadium, with our fans it’s an extra man for us and it’s going to be a real boost to stay here.

"It was a really good performance from us, of course qualifying before the game meant we had a lot more freedom and time to express ourselves. I’m happy with the performances from myself and the team."