Fifteen months have passed since Shamrock Rovers last played in front of fans at Tallaght Stadium, or 469 days, but who is counting?

No doubt every one of the 7,522 fans who were there that night to see one of the best games in recent history and witness the changing of the guard, as Rovers beat the then champions Dundalk 3-2 in a thrilling encounter.

A lot has happened since the gates were locked that dark February Friday, as the Covid-19 pandemic began to wreak havoc around the world, while calling time on international sport.

Sport came back, of course, but not as we know it.

The show must go on, and on it did, minus one essential ingredient, the fans.

And for the Hoops, all went to plan as they secured their 18th league title, going unbeaten for the remainder of the shortened season.

Rovers won their last league title in 2011, so most fans could take solace from still-vivid memories of the back-to-back successes and trophy hoisting in the Michael O'Neill era.

However, for the younger generation, that long, long wait for the return of the beautiful game will offer them some sense of what older Hoops endured for the homeless years, as it took 22 years to journey from Milltown to eventually finding a new home in Tallaght.

And tonight’s occasion brought back more sweet memories of that first league game at the new arena in 2009, as Gary Twigg led the home side to victory over Sligo Rovers in front of a full house.

The Hoops can now attempt to retain their title as the trial return of fans will hopefully build up to bigger and better crowds that the 1,000 that were fortunate to avail of the tickets for tonight’s game against Finn Harps. 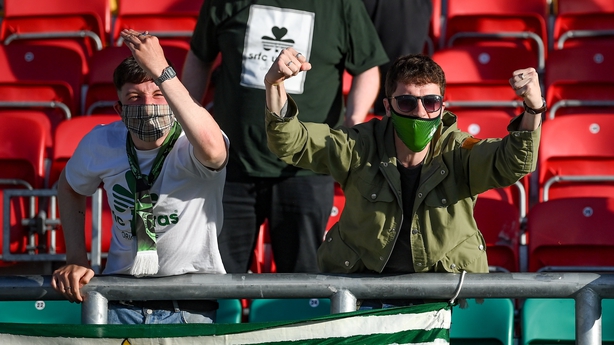 As the game kicked off in the early summer sunshine, the champions began the game a point off the top of the table as their record-breaking unbeaten run was finally ended, and then remarkably, they lost again.

But the mid-season break was timely, and now Rovers returned with a chance to reach the summit once again, with a victory over the Donegal side.

And as it happens, 1,000 fans, socially distanced around the three-sided stadium, can make quite the racket, as the noise boomed around at kick-off with the teams arriving out onto the pitch.

And the chant of "Ireland’s Number One" that reverberated around the no-longer ghost town stadium appeared most apt after eight minutes as Rory Gaffney and Aaron Greene combined to orchestrate the first authentic goal-scoring celebration in many a month.

The number 12 jersey has long been retired at Rovers, as a tribute to the fans who brought the club from the brink of extinction through to the aforementioned new home, and onto the glorious occasions of winning leagues once again, while enjoying great European nights against the likes of Juventus and AC Milan.

Then a solemn moment on a night of celebration.

In the 12th minute the entire stadium stood and applauded the faithfully departed Hoops, who have died since that last home game in 2020 throughout the coronavirus crisis – the inimitable Big Dec and several other Hoops gone but never forgotten. 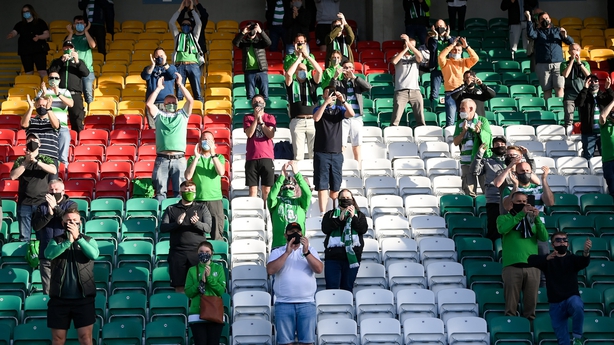 Tonight’s game, of course, is part of the trial events being staged as part of the Government’s programme to test the return of fans across Irish sport under the 'Resilience and Recovery: The Path Ahead’ programme.

Simultaneously, fans were back in Turner’s Cross watching Cork City take on Cabinteely, while in the oval-ball game, Leinster were also welcoming supporters back to the RDS for their Rainbow Cup game against Dragons.

And all going well, the fans will continue to return to more sporting events throughout the country with Phase 2 set to begin in July. 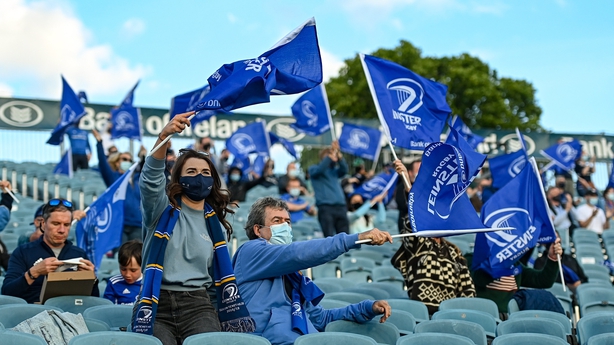 Meanwhile in Tallaght, those fortunate folk who eagerly arrived early - very early in some instances – were settling back into life as a football fan, rediscovering their unique ability to challenge every decision not to their liking made by the man in the middle, while partaking in the age-old tradition of a quip and cajole of the opposition.

The joy of being back was doused with a decent helping of disappointment as the sun began to set behind the goal the home side were defending in the second half at The Square End, as Harps' top scorer Adam Foley squeezed an equaliser under Alan Mannus’ large frame.

A huge penalty appeal in the 83rd minute - from the Hoops supporters at least - did not sway the referee, who similarly was working for the first time with the added attention of the attendance.

Rovers have not necessarily being playing like champions this season, however, they have become quite the escape artists, grabbing several vital goals in the closing minutes of matches.

Returning Ireland call-up Danny Mandroiu would hit the post late on, however, tonight there would be no such late-goal drama as the spoils were shared, and all those who partook in the trial event should have returned home with a smile on their face, at least.