Declan Rice hopes to be toasting Euros glory with his first ever pint of beer having overcome the knee injury that threatened to rule him out for England this summer.

Gareth Southgate faces a number of tough decisions ahead of Sunday's Group D opener against Croatia, but the 22-year-old is among those assured of a starting role.

Rice has become a key part of the England side since switching allegiance from the Republic of Ireland, with whom he won the last of three senior caps in June 2018.

Later that month the West Ham midfielder was cheering on the Three Lions at a giant fanzone in Dubai as they kicked off their run to the World Cup semi-finals.

Videos of fans throwing beer in the air at such venues went viral during the tournament, but Rice was never going to be among those launching pints.

"Not really (a drinker). But a pint? No. I know it is off topic but I have never had a beer. People get surprised. I just don’t like the smell of it so I have never gone near it."

Asked if he will have a beer if England win the Euros, Rice said: "Yes. I will give it a try – but I will probably spit it out!

"Honestly, the World Cup was buzzing. I remember watching the Panama game, the Tunisia game, Sweden game. It was incredible.

"The singing before the game, the national anthem. Just being a part of it. I was a fan for that tournament so to be part of this tournament is unbelievable."

Rice was only making his way in the game with West Ham during the 2018 World Cup – a time when he says his decision to switch from Ireland "was done".

Now, he is at England’s base in the brewing town of Burton with 19 caps to his name and playing with his best friend Mason Mount. 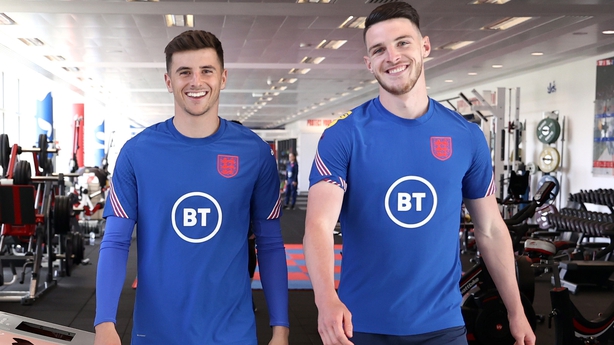 "I was speaking about it yesterday to Mase when we got handed the legacy caps," he said. "The journey we have both been on together. It is incredible.

"We are 22 and about to represent our country at a major tournament. We both cannot wait for it to come round.

"Obviously growing up watching England in tournaments as well, you just feel the proper buzz, the effects and the desire of the country for the players to do well.

"It was like that, even in Dubai. There were thousands of English fans. You see when (Kieran) Trippier scored, all the fanzones in England going crazy. That’s what I want to be a part of now.

"I just can’t wait to experience this and just get the real buzz and excitement of the tournament."

Rice’s enthusiasm comes with an innate drive to improve, complemented by professionalism that is a large reason as to why he has never been a big drinker and will be fit for the Euros.

He had been worried he would miss the tournament, having complained of his knee feeling "strange" and "unstable" after completing March’s World Cup qualifier against Poland.

"I’m a bit of a worrier," said Rice, who fired off a post-match message to West Ham’s doctor.

"They said they couldn’t put a time frame on it. They said it could be 10 to 12 weeks and they didn’t know if it needed surgery.

"I’m thinking ‘oh’. The first person I called was my dad and then (Mark) Noble, to say ‘I think I’m done’. He always gives me good advice and calms me down.

"Once we saw the knee specialist he gave me full belief I could be back and then as soon as I started my rehab it was six weeks, no days off, in every day and really smashed it out.

"I was back running in four weeks, it could have been three but I didn’t want to push, then back training with the team but it was more the fitness side of it.

"Getting back up and running, then I played three games in seven days after six weeks out at the end of the season so that was tough but now my knee feels really good and strong.

"I’ve done everything right, which gives me the best chance to perform."