Ireland ended their season with a hard-fought and well-earned scoreless draw with Euros-bound Hungary at the Szusza Ferenc Stadion in Budapest.

John Egan crashed a fifth-minute header off the crossbar in what proved Ireland's best chance of the game, while the home side were unable to break the deadlock thanks to some fine goalkeeping from Gavin Bazunu in the first half and debutant Caoimhin Kelleher in the second.

A full house at the intimate Budapest arena and the home crowd’s first involvement was to boo the Irish players for taking a knee ahead of kick-off.

It was a case of two styles for Ireland as three serious possession errors from Kenny’s men thankfully went unpunished in the opening three minutes before Shane Duffy opted for the direct approach in the fourth minute.

A long hopeful effort put the play deep into the Hungary half, which led to a set-piece on the right side, just outside the box.

Josh Cullen whipped a perfect ball across the face of the goal and Egan almost broke the deadlock with a powerful header, however, it cannoned off the crossbar and the danger was cleared.

Hungary continued to put pressure inside the Irish half but there was little to worry Kenny’s side despite the high press, and the home side were restricted to shots from distance throughout the opening twenty minutes - Roland Varga’s 19th-minute well-struck effort the closest they came to hitting the target.

Hungary continued to control the tempo with Ireland gradually pushed deep in defence, but the two sides appeared to cancel each other out as the game progressed.

The home side burst into life in the 39th minute as captain Adam Szalai tested Bazunu for the first time.

It was a near-perfect header as the big striker got in front of Dara O’Shea but the Manchester City keeper went full stretch to make a fine save to keep the game scoreless.

Hungary worked another chance on goal from the resulting corner as Akos Kecskes’ towering header was cleared off the line by Conor Hourihane.

Ireland kicked into life for the final five minutes of the half and twice went close to working the ball on target as first Duffy then Matt Doherty came close to connecting to fine deliveries that were sent into the box. 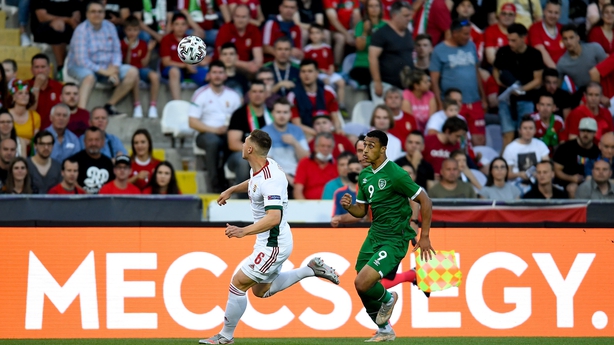 Liverpool youngster Kelleher replaced Bazunu at the break to make his senior international debut, while the home side also made one change ahead of the second half with Kevin Varga replacing namesake Roland.

A slow start to the second half, however, the young Cork man was tested in the 55th minute with a well-hit snap-shot from Adam Szalai.

The shot from the edge of the box was sneaking in at the near post, but Kelleher got down smartly to make a decent, nerve-settling save.

Two more substitutes followed for Ireland in the 57th minute with Daryl Horgan replacing Troy Parrott and Jayson Molumby coming on for Hourihane.

And Horgan was immediately involved as he raced through onto a well-timed James McClean clipped pass just moments after coming onto the pitch.

The Galway native trapped the ball on his chest before working it inside to the arriving Adam Idah, however, Attila Szalai read the danger and just managed to toe-poke the ball away as the Norwich striker looked set to pull the trigger.

Idah then had another look at goal as the home side played a sloppy ball inside that fell into the striker's path.

Striding forward, the goal opened up for him and while Jason Knight was arriving to give an option outside, the centre-forward was always going to shoot. A decent effort sent sub keeper Adam Bogdan down to his right to bat the ball away.

The game started to open up and the home side also were starting to create in the final third as substitute Loic Nego was rolled in on the right side of the box, which needed a huge Duffy lunge and block to prevent the shot testing the Ireland goal.

Ireland went on the attack once again in the 75th minute and it came from an inch-perfect long ball out of defence by Duffy, which Idah raced on to.

The striker held the ball up in the box before feeding the ever-busy Knight who eventually worked the ball back in toward Idah but he could not work the ball on target.

Anything Gavin can do...! Brilliant stop from Kelleher on a night where both of Ireland's young keepers have shone https://t.co/n3vd2sk3dM #RTEsoccer pic.twitter.com/t4GknIzuhX

Both sides were intent on pushing for the winner and the Ireland performance was impressive with the energy levels that were being maintained heading into the final ten minutes.

McClean had a back-post header saved following a good Ireland move in the 81st minute; however, it was the home side who came closest to breaking the deadlock a minute later when the captain again threatened the goal.

Kelleher sprung into action to get a strong hand on the striker’s fine header, and the keeper was called into action a minute later as Ireland failed to clear a corner and Attila Szalai’s goalbound effort was turned over the bar.

Adam Szalai was again able to work a shot from the edge of the box as the game moved into the final five minutes and it would have been a disappointing goal to give away as a string of sloppy passes gifted the big striker the chance. His curling effort just drifted past the post.

A double substitution for Ireland in the 89th minute as James Collins and Chiedozie Ogbene came into the attack, and the former Cork City forward could have won it with his first touch as he beat the offside trap following a clever through-ball by Horgan.

It could have been a dream debut for Chiedozie Ogbene but the angle was against him! https://t.co/n3vd2sk3dM #RTEsoccer pic.twitter.com/sIT4b3Fp04

Ogbene opted to shoot first time with his left foot but the angle was narrowing and the ball crashed into the front post side-netting.

Szabolcs Schon then had a look at goal at the far end, but it was the visitors who ended the game on the front foot as Ireland pushed for a winner throughout the three additional minutes.

The deadlock remained, however, for what was probably the right result in an entertaining scoreless draw in Budapest as Ireland call time on the season, while Hungary get ready for the Euros where they will meet Portugal, France and Germany.