Germany scored five times in the first half as they thrashed Latvia 7-1 in Dusseldorf in their last Euro 2020 warm-up match.

Robin Gosens put the home side 1-0 up in the 19th minute and Manchester City's Ilkay Gundogan doubled the advantage with a strike from the edge of the box two minutes later.

Thomas Muller slotted in the third six minutes after that, a delivery from Chelsea's Kai Havertz went in off goalkeeper Roberts Ozols for the fourth and Serge Gnabry then cracked in to make it 5-0 just before the interval.

Efforts from Havertz's club-mate Timo Werner and Leroy Sane followed after the break, either side of a reply from Aleksejs Saveljevs.

Joachim Low's men open their Euros campaign by playing France in Munich on 15 June, with matches against Portugal and Hungary to follow in Group F. 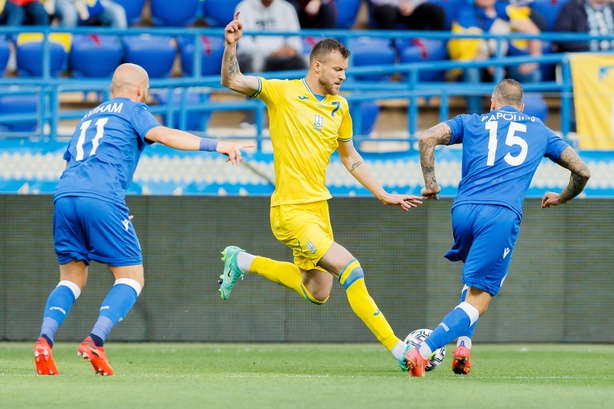 Andriy Shevchenko's side took the lead via Yarmolenko's 37th-minute penalty, awarded following a foul on Oleksandr Zubkov by Andreas Panayiotou, who was sent off.

City defender Oleksandr Zinchenko then added a spot-kick of his own in first-half stoppage time after a handball by Nicholas Ioannou.

Roman Yaremchuk made it 3-0 in the 59th minute and Yarmolenko subsequently added his second six minutes later with a deflected effort.

Ukraine are in Group C at the Euros and start by facing Holland in Amsterdam on Sunday, before taking on North Macedonia and then Austria.

Watford's Andre Gray was on the scoresheet for Jamaica in their 1-1 draw against Serbia in Kobe, putting his side ahead before Strahinja Pavlovic equalised.

Other international friendlies on Monday saw the Faroe Islands beat Liechtenstein 5-1 in Torshavn and Andorra draw 0-0 at home with Gibraltar.