Gareth Southgate's pleas for England supporters not to jeer his players taking a knee were defied as the Three Lions laboured to a 1-0 victory over Romania in their final Euro 2020 warm-up game.

After a minority booed the stance ahead of Wednesday’s win over Austria, Southgate urged fans to back the decision of his squad to show their solidarity against racism and inequality.

But the jeers returned to the Riverside Stadium for the second time in five days, where an experimental and inexperienced England earned victory through captain Marcus Rashford’s second-half penalty.

Dominic Calvert-Lewin and Jadon Sancho struck the crossbar in a first half of minimal quality from the hosts.

Romania were proving more of a nuisance than many had expected, but England clearly had more quality.

James Ward-Prowse failed to catch out goalkeeper Florin Nita with a free-kick from an acute angle, with Rashford rushing forward from just inside his own half before dragging across the face of goal.

England would take the lead in the 68th minute. Substitute Tiberiu Capusa brought down Jack Grealish in the box and Rashford stepped up to the resulting spot-kick, coolly slotting low past Romania's statuesque goalkeeper.

Romania looked bound to level in the 74th minute, only for Sam Johnstone to save the day with an exceptional stop from Ivan after Tyrone Mings blocked an initial effort.

England had the chance to pull further ahead from the spot four minutes later.

Former Tottenham defender Chiriches brought down Calvert-Lewin in the box, with the returning Jordan Henderson stepping up only to see his strike saved by Nita.

A smattering of derogatory chants from a small number in the crowd and a first-half pitch invader only added to the ill-feel from the stands as 6,952 supporters watched on – with numbers slowly growing as coronavirus restrictions lift.

There are due to be 22,500 in attendance for the Euro 2020 opener against Croatia at Wembley next week, where the reaction to taking the knee will be seen across the continent.

Southgate made nine changes from the Austria victory as three of those players cut from his 26-man squad started.

Ben White, Ben Godfrey and Ward-Prowse will be hoping to be the one called up to replace the injured Trent Alexander-Arnold and it was the latter who caught the eye.

Captain Harry Kane was named on the bench, with Rashford wearing the armband for the first time as the only player in the starting XI to have won more than 20 senior caps.

But it remains to be seen how many of this side will start against Croatia – especially with the seven Champions League finalists returning to contention following an extended break. 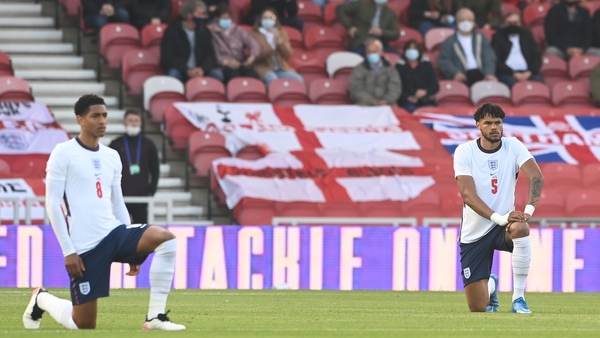 Southgate: England 'more determined than ever' to take knee despite boos