Sergio Aguero has signed a two-year contract with Barcelona.

The Catalan club announced the Argentinian forward would join them on 1 July when his current deal with Manchester City expires.

He will officially sign his contract with Barcelona at 5pm, before being presented to the media an hour later.

Barca said Aguero's buy-out clause had been set at €100m.

City announced on 29 March that Aguero's contract would not be renewed and that his 10-year stint at the club would end this summer.

Aguero joined City from Atletico Madrid in 2011 and went on to score 260 goals for the club, none more important than the stoppage-time strike which sealed the 2011-12 Premier League title.

His final appearance for City came in Saturday's disappointing defeat to Chelsea in the Champions League final in Porto.

In all, he won five Premier League titles, one FA Cup and six League Cups with City.

Aguero, who turns 33 on Wednesday, began his professional career with Argentinian club Independiente before joining Atletico in 2006, where he won the Europa League in 2010.

Manchester City posted a tweet in recognition of the news which read: "Sergio Aguero will join Barcelona at the end of June. Thanks for everything @aguerosergiokun"

On Sunday, a tweet on Aguero's own official Twitter account read: "Proud of this team and to have worn its colours for so many years. Manchester City, forever in my heart." 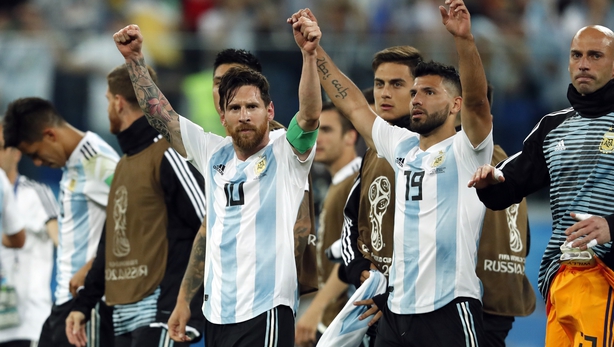 Lionel Messi was one of the first people to congratulate Aguero on his move to and the former City striker is hopeful his Argentina team-mate will stick around so they can forge a new partnership.

Aguero is a long-time friend of Messi as the pair have shared an international dressing room for several years, but this will be the first time they will be on the same team at club level.

Speculation continues to surround Messi, whose future now seems to be an annual discussion, but Aguero is optimistic they will have plenty of time together at the Nou Camp.

"I talk to Leo every day and he sent me a congratulatory message. Now that I will have him every day it will be much easier," he told a press conference.

"What happens with Leo will be the decision of the club but it is a pleasure and a pride to play with Leo.

"If he continues, which I think he will, I will try to give everything as he has always done."

"Guardiola, when we won the Premier League, he told me 'You're going to the best team in the world’"

Aguero said there was only one club he wanted to join when he knew he was leaving City.

"I didn't even hesitate. I didn’t want someone else to talk to me, just Barca," he said.

"(Pep) Guardiola, when we won the Premier League, he told me 'You’re going to the best team in the world’.

"For me, since I was a child – and now also because Leo is here – this is the greatest team.

"As a boy I said one day they will surely notice me and here I am.

"I will help to win and do great things. Except for last season, at City I have had nine very good years and above all I have been able to help the team achieve important things.

"Last year, due to my knee, I could not be at the maximum, and also after Covid, but later on I felt good and the knee is perfect. Now we just have to show it here."

Somewhat tellingly, Aguero said he had not spoken to coach Ronald Koeman, whom Barcelona president Joan Laporta said had been informed by the board they wanted the Argentina striker.

Koeman’s own future remains the subject of discussion after the club finished third in LaLiga behind both Madrid teams and winning only the Copa del Rey.

"We told Koeman that we wanted Kun (Aguero). We wanted to close it before the Copa America," said Laporta, who denied they had signed the striker to keep Messi happy after Luis Suarez’s departure last summer enraged their star player.

"The signing of Kun is because he is exceptional. We want Kun at Barca, we also want Leo there, and this will be just one of the next signings that will come to this club."

"With Ronald I already said that we have started a period of reflection," he added.

"He is a coach who has a contract and must be respected. We will see how everything goes but things are going very well."