Republic of Ireland Under-21s boss Jim Crawford has challenged his new generation of players to be inspired by Jason Knight's elevation to the senior team.

The 20-year-old Derby midfielder was not even in the Under-21s squad when they started their most recent European qualification campaign, but his progression has been such that he was handed a debut as a substitute by Stephen Kenny in Ireland's Nations League defeat in Finland in October last year and now has five caps.

Kenny's willingness to promote young players has been a feature of his reign and as he prepares for Sunday's friendly against Switzerland in Spain, Crawford knows there are opportunities for the men currently under his charge.

He said: "There is a knock-on effect and what it does is it highlights that the senior manager, Stephen Kenny, isn't afraid to play young players or use them when required, so that's great.

"For any young player now, it really does give players something to aspire to. We've been talking about that since we came in with the players, that there's a strong pathway here - you go and play well with your 21s, you go back to your club, you do well, you come back, September you do well with the 21s, who knows?

"You look at Jason Knight - our very first game in the European campaign against Luxembourg, he wasn't even in the squad; now he's playing with the seniors in this window too.

"He's gained I don't know how many caps up to now, but it's a fantastic story." 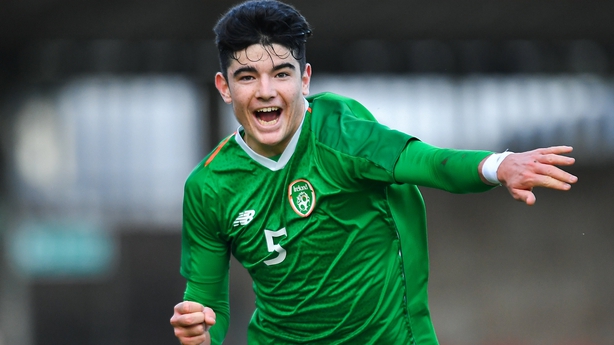 Crawford has drafted Watford's Bosun Lawal and Wolfsburg's Anselmo Garcia McNulty [above] into his squad for testing games against the Swiss - who beat England in their Euro 2021 finals group - the Australia Olympic team and Denmark [all live on the RTÉ Player] during their training camp in Spain.

However, 18-year-old West Ham striker Mipo Odubeko, who also qualifies for Nigeria, remains a work in progress as he attempts to persuade him to declare for Ireland.

Asked about the fixtures, Crawford said: "For me, it gives us a benchmark, playing against top-quality opposition like Switzerland, and this Australian Under-23s team are very good, they're competing in the upcoming Olympics, and Denmark is Denmark.