It was a case of the late, late show once again for Shamrock Rovers as Rory Gaffney broke Longford Town hearts with a 95th minute winner to win this SSE Airtricity League Premier Division clash at Bishopsgate.

With second bottom Longford looking like they had held out for an unlikely point, Gaffney blasted home the rebound after goalkeeper Lee Steacy had parried a header from Lee Grace following a Danny Mandroiu cross.

It's now a remarkable eight points Stephen Bradley’s Hoops have garnered from goals scored after 90 minutes this season, including a Sean Gannon winner when these sides met at Tallaght Stadium last month.

And it was the champions' welcome first win in four games to leave them trailing leaders Sligo Rovers by one point going into the mid-season break.

Without a win now in 13 games since the opening night of the season, the manner of this defeat was cruel on Daire Doyle’s midlanders who defended doggedly for much of the match. 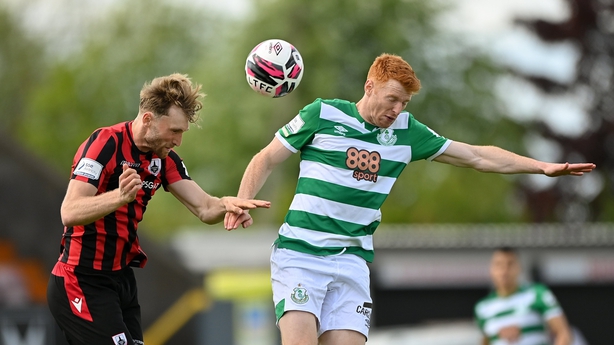 As in their first meeting, Longford needed no invitation to take the game to Rovers when they could and had appeals for a penalty waved away early on when Aaron McNally’s cross struck Grace.

Aaron Robinson then volleyed off target from a Paddy Kirk cross as Rovers were sluggish in trying to clear a long throw into their area.

Longford's solid shape continued to frustrate Rovers who laboured to get their passing game going.

Nothing having come from a couple of Mandroiu corners, the visitors didn’t get a clear sight of goal until the 26th minute, Liam Scales heading tamely wide from opposite wingback Gannon’s cross.

The ball was in the home net three minutes later, but Gaffney had controlled Scales’ cross with his hand before shooting and it was rightly disallowed.

Within a further minute, Burke cleverly made a yard of space to rifle just over the bar from distance as Hoops upped the tempo.

The lively Burke remained central to Rovers’ quest for a breakthrough into the second half, receiving a yellow card before bringing a smart diving save from Steacy with a 56th-minute free-kick.

Heartbreak for Longford - but yet another late winner for Shamrock Rovers https://t.co/lmwSiBI2Pq #RTEsoccer pic.twitter.com/SO6ilSZvJy

Eight minutes later the Hoops number 10 was left holding his head in his hands after drilling wide following a sweeping move.

Town remained a threat on their occasional forays forward, Rob Manley skying over the top from substitute Dylan Grimes' free kick on 66 minutes.

But Rovers remained dominant, pressing hard late on to get their rewards at the death.