By David Sneyd at Richmond Park

Dundalk's rollercoaster season took another twist as they produced a clinical display to take all three points away to St Patrick’s Athletic.

Five days after their last trip to Dublin, when Bohemians served up some capital punishment with a 5-1 trouncing, the Lilywhites responded by keeping just their second clean sheet of the season to secure a 2-0 win.

Sam Bone deflected David McMillan’s wayward shot into his own net after 36 minutes before the Dundalk forward’s clever movement in the box gifted him an easy second five minutes after the break.

They remain 14 points adrift of pace setters Sligo Rovers at the top, with 14 games played, while Pat’s missed the chance to leapfrog Shamrock Rovers into second as they sit rigid in third, six off the leaders.

The resilience and togetherness on show here should be the template for a Dundalk revival. Whether they can maintain any kind of consistency is another question. Another is who exactly will be in charge, with temporary boss Jim Magilton continuing to direct matters from the line.

He threatened a clear out of players following the Bohs debacle and set up with two banks of four here in order to be compact and resolute. It worked a treat, with only half chances for Mattie Smith and John Mountney in the first half.

The former cushioned a tame header into the welcome arms of Alessio Abibi, the latter hitting a shot from the edge of the box that dribbled harmlessly wide.

Then the momentum shifted courtesy of the first piece of attacking quality. Pat's head coach Stevie O’Donnell will rue the defensive lapses that played a part in Bone turning the ball into his own net nine minutes before the break but the sharpness of the build up play was top class.

Pat Hoban dinked a delightful ball over the top from near the left touchline after both Bone and Paddy Barrett were drawn to him.

Michael Duffy raced onto it, drove towards the box before deciding to check for a square pass to Patrick McEleney at the edge of the box. His fellow Derryman opened his body to slide it into the path of McMillan and his dragged shot – the one lack of precision in the move – was turned into his own net by Bone. 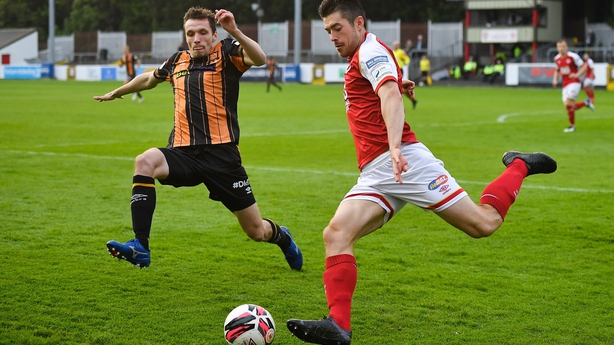 It was a sucker punch for the Saints and, five minutes after the re-start, they were again undone by a combination of Hoban and McMillan. This time it was the latter’s clever movement in the six-yard box that created the space for an easy finish to the roof of the net.

Hoban was the provider, springing the offside trap to race on to Chris Shields’ through ball down the right channel between left wing back Ian Bermingham and left-side centre back Lee Desmond.

Bone was dragged to the near post after being fooled by McMillan’s sharp feint. Instead he dropped to centre and finished calmly.

The instincts were sharp and the benefits of playing with a pairing up front were clear to see.

Four minutes later and McMillan made an equally telling contribution on his own goal line, heading Barrett’s effort clear from a corner.

Dundalk again retreated, happy to let Pat’s have the ball in front and keep them at arm’s length. They succeeded, taking all three points and keeping a clean sheet in the process as their season takes another twist.