Sligo Rovers might have converted a few of those who doubted how realistic a title charge from them would be on Monday night. They went to the home of the champions and came home from Tallaght with all three points.

It leaves them a point clear at the top of the table with 13 rounds of fixtures played. Victory this evening would guarantee them top spot heading into the mid-season break.

Their recent record in the north-west derby against Finn Harps is good, with three wins from their last four games, including last month's 1-0 win at the Showgrounds. As manager Liam Buckley alluded to on Monday, it's all about trying to stay the course now.

Sligo Rovers went top of the table on Monday night following a 1-0 victory over Shamrock Rovers. Liam Buckley believes his side can compete for the title if they stay injury free. #RTEsoccer pic.twitter.com/Rsu0Vts5mL

After a very promising start to the season which saw them take 10 points from their first four games, Harps have managed just two wins in their last nine. The league has essentially split into thirds at this stage, and the Ballybofey club are top of the second third, in fifth place.

Last week's comeback victory for Ollie Horgan's troops over Waterford will have been a nice fillip for the squad and he will want them to regain some form as they attempt to avoid getting sucked into the usual battle to avoid relegation.

Finn Harps: Ollie Horgan will be back in the dugout after completing his three match ban in Waterford on Monday. Similarly, David Webster is available for selection having already served his one game suspension for his dismissal last Friday. Johnny Dunleavy, Stephen Folan and Barry McNamee are all doubts.

Sligo Rovers: David Cawley, Darren Collins and Danny Kane will miss this game due to injury

Ollie Horgan (Finn Harps manager): "Sligo are top of the table and deservedly so. If we're not right to face them we could end up with a score similar to that in Dalymount a couple of weeks ago.

"We played out a close game with them last time with a mistake the only thing to separate us but they’ve kicked on now up the league and so it’ll be a big ask for us on Friday night."

Liam Buckley (Sligo Rovers manager): "The optics on us now are that after 13 games we're competing really well so we just need to try to maintain the performance levels and fitness levels.

"We kept the ball better on Monday and were a bit more patient and composed with it which is what we want.

"We've done well so far and overall I’m happy with the effort going in. That said, it was just three points and we are just one third into the season. That’s the reality so we just have to try to keep picking up results.

"Finn Harps have done particularly well with some of the results picked up in recent weeks and I think both sides know this will be a difficult task."

Drogheda come into this clash against Derry in excellent from with four wins on the bounce and unbeaten in their last six. This run has seen them move into the top four, six off Sligo at the top but four clear of Finn Harps in fifth.

When you consider that Drogs were playing in the First Division last season it's a great credit to Tim Clancy and his players to have put such form together so soon into the new campaign.

United Park has been good to them up to this point, with three wins and three draws from their seven games. Danny Mandroiu's late winner for defending champions Shamrock Rovers last month has provided their own blot on their home card. 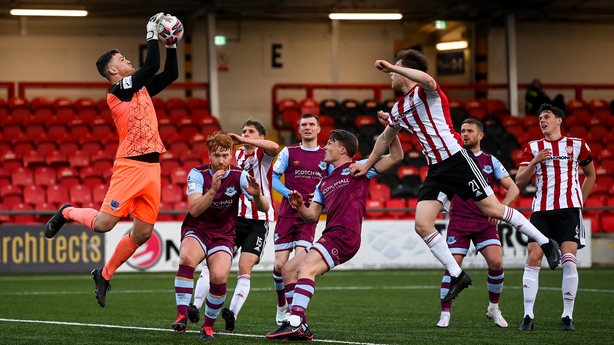 Back to back wins heralded Ruadhri Higgins' arrival at the Ryan McBride Brandywell, but honeymoon period appears to be well and truly over at this stage.

The Candystripes have managed just one win in the intervening five games. Crucially though Longford and Waterford below them are really struggling, so picking up points here and there might prove enough in their battle against the drop.

Ruadhri Higgins (Derry City manager): "Drogheda are a vibrant young team with energy and some experience," Higgins told the BBC.

"If we are to pick up three points we will have to be at our very best and match them in every department. They are only six points off top and will have their eye on the European spots, and rightly so.

"I know Tim Clancy and his assistant quite well, they have done a great job in putting that team together and it has been together for a long time with a few additions in the off season.

"They have momentum, they are the form team in the league and if we show any arrogance at all they will turn us over, but if we show them the respect they deserve then we can pick up a positive result."

Sligo's defeat of Shamrock Rovers has sucked St Patrick's Athletic right back into the title fight - if they can find some form.

Stephen O'Donnell has enough Premier Division winners medals in his back pocket to know that a continuation of their recent run of form will have them battling for European places - rather than the league trophy - very soon.

They have just one win in their last five matches, and yet the gap is just three points at the moment. If we're to take it that all teams are going to have their dodgy patches this season, then the Saints will be delighted if theirs ends with the gap to the top of the table at just three points. 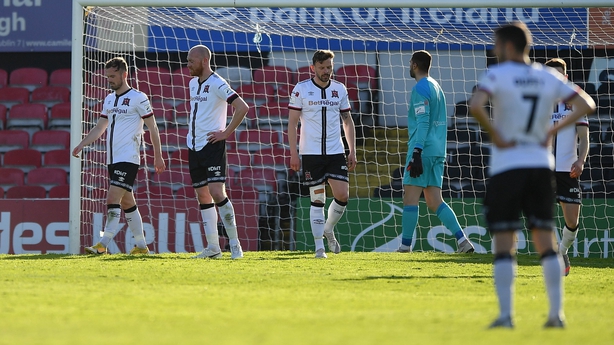 Dundalk showed their best and worst qualities last weekend, beating Shamrock Rovers at Oriel before being annihilated by Bohemians at Dalymount. Sporting director Jim Magilton took full responsibility for Monday's shambles, admitting that he should have made changes to the team that had taken points full points off the champions.

Already 14 points off the top of the table, and eight off the European places, the Lilywhites need to start winning games on a regular basis if they have realistic ambitions of reining in the top-four in.

Dundalk: Cameron Dummigan is suspended after being sent off in the game with Bohemians on Monday but Patrick Hoban is in contention after recovering from a calf injury. Ole Erik Midtskogen and Sonni Nattestad are out while Brian Gartland and Daniel Cleary are recovering from surgery.

Stephen O'Donell (St Patrick's Athletic manager): "If you had told me that Dundalk would be mid table after 13 or so games, I would have thought you were messing.

"A lot of the games are fine margins, but we saw what they are capable of last Friday when they ended Shamrock Rovers unbeaten run and that's what you judge them off.

"You judge them off the ceiling that they can get to and when they do perform, they can perform at a really high level. They’re as good as, if not better than anyone else in the league ,when they are at it."

Dave McMillan (Dundalk striker): "In the league at the moment, anybody can beat anybody. I think that's been shown in the last week.

"The team that can string four or five wins together in a row will move up the table pretty quickly and that's what we're trying to do here, to try and get a positive result and just build on it and get confidence.

"I think the most disappointing factor for us is that we've kept just one clean sheet all season. We need to rectify that if we're going to win more games and we're working hard to try and fix that. It's not going to happen overnight for us but we've just got to keep trying to work on it and make sure that it does happen."