The learning process is something that Nadine Clare knows is essential if she wants to reach the next level.

Off the pitch, the Dubliner is studying for her Leaving Certificate exams coming up next month. On the pitch, she's trying to soak up as much information as possible in order to help DLR Waves continue their impressive start to the SSE Airtricity Women's National League season.

As they prepare to take on champions Peamount United on Saturday afternoon, Graham Kelly's side have collected four wins, one draw and one loss from their six games.

It's the kind of form that suggests DLR could be about to enjoy their best league campaign yet, but Clare feels there is still a lot to learn - individually and collectively.

"In pre-season, we wanted to get off to a good start and see if we could get into the top four; that was our aim. We are in that position at the moment but we have to keep pushing and improving with each game," said Clare.

"I want to keep learning and, to be fair to the coaches, it is a great environment to learn in. We all push each other to get better and the coaches give us great advice all of the time.

"For my own game to improve, I need to keep learning. I need to learn how to contribute more in games, whether that is making runs into the box, getting on the end of crosses, getting shots off or helping out defensively."

Alongside Fiona Donnelly in the centre of midfield, Clare has caught the eye of many international scouts at games this season. A box-to-box player with a robust engine and slick range of passing, she has been making an impact.

"We all push each other to get better."

However, adding goals and assists to her game is next on the 'To Do' list. It is something that manager Kelly and assistant John Sullivan have been preaching to the talented teenager.

"Graham [Kelly] wants us to communicate more but I think we [Clare and Donnelly] are talking more to each other throughout the game. For example, if one goes and one sits, we try to communicate that.

"Quite often I will be the one who goes forward, but it really depends on how the game is going. I think, as a midfielder, it's really important to get your shots away and set up as many chances for your team-mates as possible.

"Graham and John [Sullivan] have really emphasised the importance of getting shots off and it's an area that I would like to improve in my game."

Clare has long been a player on the rise, from her days with Wayside Celtic and Enniskerry before joining DLR Waves' U17 team. She was also part of a star-studded MGL Academy side that dazzled at the Gaynor Cup.

Now, though, she is trying to excel at the highest level of women's football in this country. She learned a lot from last year's truncated season and is now putting all of the theory into practice.

The tough exams to complete her schoolwork are getting closer, but first she must help DLR overcome their most difficult test of the season yet when Peamount visit the UCD Bowl on Saturday. 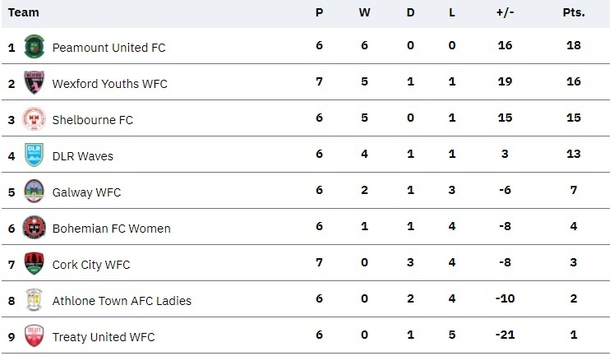 Bohs were hammered 7-1 at Wexford Youths and really will be desperate to atone for that with a good performance and result.

They certainly won't have it easy here though. Shels bounce into this off the back of a 5-0 defeat of Galway and have lost just once so far. If results go their way, they could end the weekend top of the table.

Cork have yet to register a win having gone down 3-1 against table-toppers Peamount last time out. They're still two points clear of bottom-paced Treaty however.

The Limerick outfit had no game last week so come to Turner's Cross fresh as they look for a victory that would see them leapfrog their opponents.

Galway's preparations for this were hit by the news on Wednesday that manager Billy Clery has resigned "due to family commitments". Maz Sweeney has been appointed caretaker manager for the visit of Athlone.

First-team coach Dave Bell has also departed and although Athlone are second from bottom, they really put it up to DLR Waves last week when losing 1-0 and may fancy their chances of capitalising on the current upheaval at Galway.

It's a big game at the UCD Bowl.

DLR Waves edged past a plucky Athlone last Saturday to keep themselves within touching distance of the pace-setters but this is an altogether different challenge.

Reigning champions Peamount have six wins out of six and do not look like a side whose hunger has diminished after they won the double last season.

They are rammed with class and experience but DLR Waves are an improving outfit who could well blow the title race open if they can produce a huge performance.