Dundalk sporting director Jim Magilton has admitted to having a conversation with former All-Ireland-winning Donegal boss Jim McGuinness about the vacant managerial role at Oriel Park.

However, despite some reports claiming that the 48-year-old is in line to become the new Lilywhites boss, it is understood that the Glenties man is not a serious contender to replace Shane Keegan and Filippo Giovagnoli, who walked away from the Co Louth club just over a month ago.

RTÉ Sport understands McGuinness has been offered a short-term coaching role with the Lilywhites, but is not keen on taking on a position on a temporary basis.

McGuinness, who is in the process of completing his UEFA Pro Licence, had a brief spell in charge of American USL side Charlotte Independence but was sacked after just 14 games at the helm in June 2019.

Prior to that, he also held positions at both Celtic and Beijing Guoan.

Asked if he'd been selected as the next manager of Dundalk, Magilton replied: "He's definitely not selected."

When asked was he in the running, Magilton responded: "He could be."

And when asked if he was definitely in the running for the role, the current interim boss replied: "No, you said that."

When pressed further on whether he wasn't ruling out McGuinness for the vacant managerial post at Oriel, Magilton said: "I haven't ruled anyone out."

Magilton admitted to being a "huge fan" of McGuinnes. "I've always loved GAA and I liked his approach to Donegal - a winning brand," he said.

"Jim has been a successful manager, albeit in a different sport. I believe there are crossovers, no question about that. Conversations with these guys are very important. You get different perspectives on all aspects.

"Anything that helps, helps. It’s just conversations. I’ve spoken to other people who’ve given me another perspective on elite level sport." 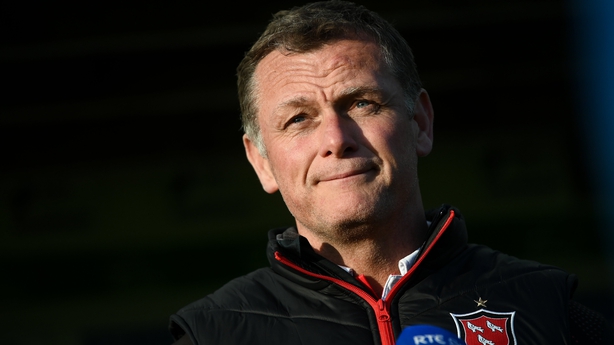 The former Northern Irish international said he would remain in temporary charge of the Co Louth side until the mid-season break on Friday week at least but admitted some progress had been made in the club's managerial search.

"I've had really good conversations this week believe it or not and I've enjoyed them," he said.

"We'll get to the break and we'll take it from there. There has been one or two interesting ones."

Dundalk currently sit seventh in SSE Airtricity League table ahead of the visit of table toppers Shamrock Rovers to Oriel Park on Friday.

With just 11 points from 11 matches to date, the club haven't had a worse start to a campaign since taking just seven points from as many matches in 1998/99 - a season in which the club was relegated for the first time in its history.

The poor start coupled with ongoing rumblings off the field has also led to supporter unrest with a protest planned by fans outside Oriel Park on Friday night.